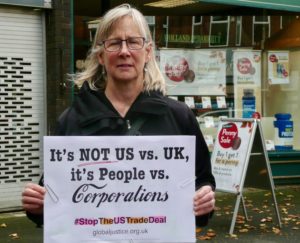 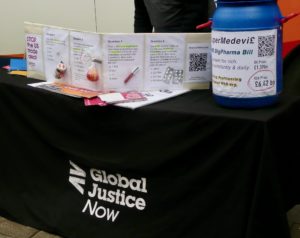 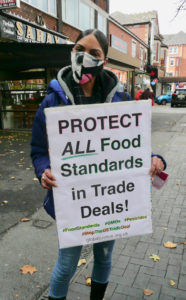 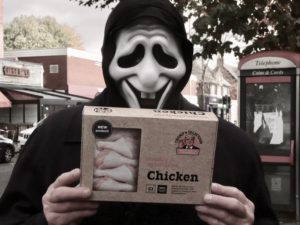 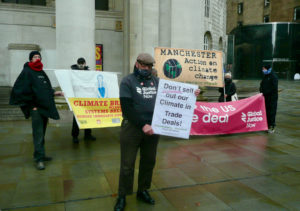 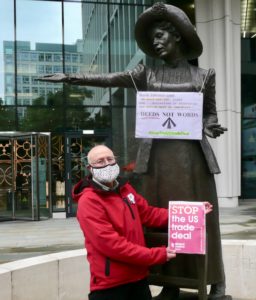 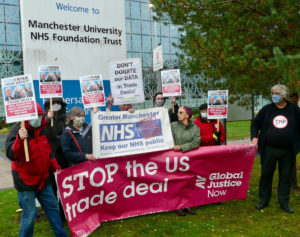 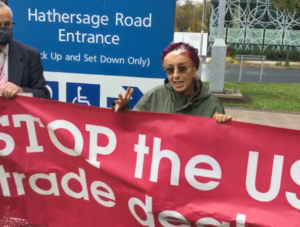 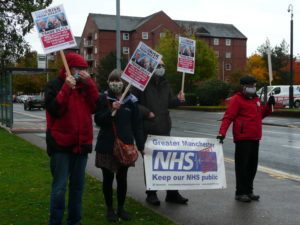 Whatever the severity and urgency of the Pandemic it’s important to keep one’s eye on the fundamental threat: climatic disaster

As often emotive headline facts and anger lead to sub-optimal effect when the big picture is not seen; battles may be be won, but the fundamental causes and issues will bring new problems to be addressed.

So, wary of the implications which are likely to result from reckless and 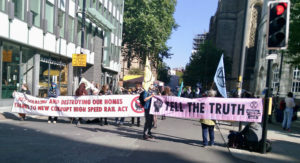 irresponsible trade deals a couple of us went along to the formal beginning of Extinction Rebellion’s #WeWantToLive “Northern Rebellion” in St. Peter’s Square on 1st. September.

As you would expect on a sunny day, it was well attended with a samba band that had come from the NE as well as folks old and young from the Lakes and Lancs, Bury and Burnage. The road outside the Midland Hotel and Friends Meeting House was blocked, some meditated and the police were gently in attendance while the trams ran unmolested with their squealing drowning out speakers at times. 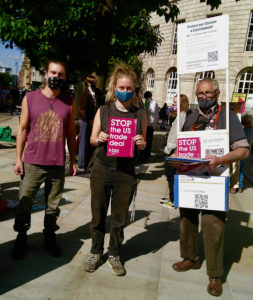 We mingled offering materials, inviting people to sign petitions and come to our webinar, QR codes for which had been generated and printed. However as time went on I became more aware that “Town” is but a shadow of its former self; plenty of activists, but fewer tourists, shoppers and workers. Many are more cautious of others.

Wary of being trolled (as had already happened in the comments on the MEN website’s disparaging report written before the event) organisers were at pains to encourage social distancing, mask wearing and the peaceful nature of the event.

The mysterious Red Brigade made silent appearances (seen here contemplating the fate of climate refugees), as did independent photographers; HS2 was vilified. a priest in Salford represented Christian Climate Action and a wheelchair user emphasised the desire of disabled activists to participate. A formation dance was performed (socially distanced) and a GP spoke of his experiences in 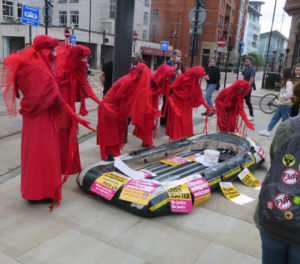 Africa . He had set up a Doctors’ XR group which had coordinated posting health warning stickers on over 50 local petrol stations. Marc Hudson from Climate Emergency Manchester spoke well on the need for persistence (and their petition for a scrutiny committee); Mums and Dads with tots and children (celebrating the end of exile from school) chalked the pavement.

We were reminded of the Palestinian issue, Demilitarise Education, and problems facing renters. Later moving testimony was given from the sister of Chris Alder who had been died in police custody 22 years ago. Young Manchester FoE members, School Strikers and other young folk spoke in varied ways: some sweary, some naïve, some inarticulate in their distress.

Eventually we had a chance to point out the links between trade and ecological and climate breakdown. People listened, but action is more difficult and was disappointingly not evident.

Later the faithful went on a wander-march around the city centre, supposedly to see the sites of “climate sinners”, though the only couple of stations I noted were outside the DWP (2 St Peter’s Sq., underneath Ernst and Young and next door to KPMG, both of whom Christian Aid challenged a few years ago (with PwC and Deloitte) for their failures to make climate-impact reporting norms for banks. 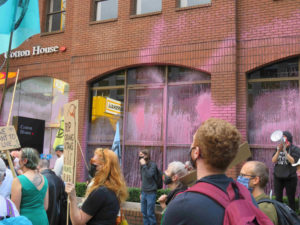 Banks were not visited (their day will come) and we ended up squeezing past a police van and legion to admire a pink sprayed building hidden next to the Rising Sun and Credit Union offices in Lincoln Square. We were told this was used by the Daily Mail. We had a bit of a sing song and made our way back to St. Peter’s Square.

We left at that point having tickets for the launch of Nick Dearden’s book. Many others sat around taking refreshments before a vigil, more speakers and workshops.

The knock on effect of the pandemic depleting the audience resulted in what I found a bit disappointing after last year. One always has a first flush but now they were victims of their success – Deansgate is still largely pedestrianised and their threat to business is well enough perceived for mass media to almost blank them.

Supportive councilors were conspicuous by their absence and there were fewer non-campaigners engaged. An incredible amount of expense, organisation and work had gone into preparing publications, hardware, and roles; they could have coped with many more attending.

Then came the rain…

I went along on Tuesday where a much smaller gathering was blighted by persistent rain. There were even fewer passers-by to be engaged but some fun was had by a mass dance. Later we were led off by a circuitous route, with police motorcyclists buzzing too and fro to block off streets . This ended in Dale Street outside the offices of Boohoo where there was some shouting, a smoke flare was let off and (when the samba band arrived) there was more sound. Unfortunately my camera conked out due to the rain and photocopied posters decomposed.