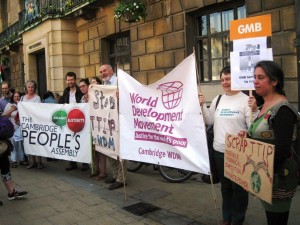 For reasons why we need to say No to the Transatlantic Trade and Investment Partnership (TTIP) see the WDM post here.  Cambridge WDM joined with several other Cambridge groups on Saturday 12 July to say No to TTIP outside the Guildhall.   In the picture you see our group banner alongside a splendid issue-based banner Sue made for the occasion, and banners from other organisations opposing TTIP — the Cambridge People’s Assembly Against Austerity and the GMB union.  War on Want joined in too — 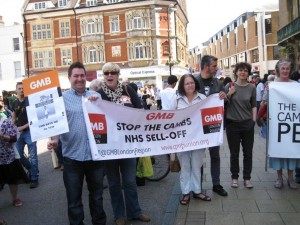 and we had a good speech from Daniel Zeichner, Labour’s Prospective Parliamentary Candidate for Cambridge.  Here he is pictured with Clare and our banner. 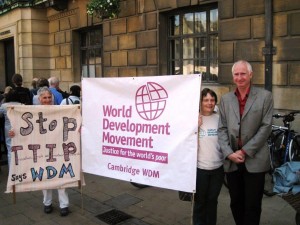 This was outside the Guildhall on Thursday 26 June.  It’s not the first time we’ve worked with Cambridge Amnesty.

I was a teen in the 1970s when the allegations of army torture in Northern Ireland began to come in.  How quickly people moved from indignant denial  to ready justification of its use!  The justifications are all the readier now.

It was a respectful imitation of Cambridge’s Blue Guides, stopping not outside the colleges and historic labs but the branches of NatWest, HSBC, Barclays and Lloyds.  The aim was to draw attention to the role these banks play in financing harmful coal mines.  More on that story here.

Aidan, Clare, Sue, Nicola, Bernard, Angela and some others took part, and pumped out leaflets and action cards.  And what we all said afterwards was, Let’s do it again!

We fielded a stall at Strawberry Fair!  Thanks Bernard Rudd for loan of gazebo, and Beth and Colin for loan of picnic table.  The rounds were to distribute leaflets in connection with WDM’s Carbon Capital campaign.  We gathered signatures on 78 postcards calling on Lloyds Bank to pull out of bankrolling coal.

Next thing is to take that same message to the banks on the streets.

The new rules will limit the number of food contracts that banks and other financial institutions can hold, and will make for greater transparency in financial trading.  So there’ll be less to drive food prices up.  This goes some way towards what WDM’s been campaigning for.  The news broke on 14 January.

WDM Director Nick Dearden had this to say:
“Public outrage over food speculation has been huge and the fact that the EU has listened to that anger is a victory for public pressure. But the UK’s role in watering down the regulation has been a disgrace. The Treasury has put the profits of banks like Goldman Sachs above the basic human need for food, with the result that the new rules could be too weak to be effective. Yesterday’s agreement is a good step forward, but now we need to make sure the limits are set at a level that properly tackles excessive speculation.”

And we’re up for that further campaigning, Nick.  Those of us who’ve written to Vicky Ford MEP, or visited her in her Hardwick office, won’t be calling it a day just yet.

If you’re not yet much involved in the work of the World Development Movement, this can be your chance to meet Cambridge members and and find out about the Movement’s hard-hitting campaigns on food justice and the bankrolling of climate change.

Or it might just be a time to meet old friends for food and an exchange of news. Kids welcome — & we hope to have a kid-friendly video or two in case food justice is not yet their scene.

Email Aidan Baker for details of the venue! 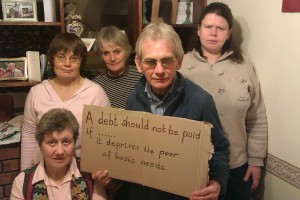 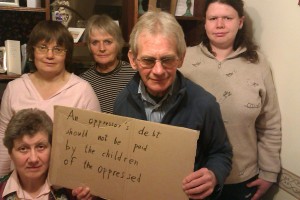 This was at the Cambridge WDM meeting of 16 October 2013.  Members (from left) Angela Macquiban, Clare Baker, Sue Woodsford, Bernard Shaw  and Angela Kalinzi Ditchfield joined Jubilee Debt Campaign‘s protest against the continuing transfer of money from poor countries to rich.