What’s the struggle for global justice going to look like after the Covid-19 pandemic recedes? Global Justice director Nick Dearden has plenty of ideas.  Hear him — and quiz him — by Zoom, 19:45 for 20:00 on Wednesday 17 June.  Contact us for further details.

When the COVID-19 vaccine, which scientists worldwide are chasing, is a thing, let’s make sure it’s affordable to all!  Sign Global Justice Now’s current petition,

Dorothy Guerrero is Global Justice Now’s Head of Policy and Advocacy.  She was born and brought up in the Philippines and has worked in justice and advocacy for around 30 years.

Her activism began in the late 90s. Debt was a major problem for the Philippines, and environmental issues were seen as a middle-class concern along with birdwatching. But Dorothy came to see that climate was as important as protecting wildlife and ecosystems.

Her MA was in ‘development studies’. She started to visit the poorer islands of the Philippines, sharing her political knowledge and discussing issues with the local people.  She came to see that many of those she met were victims of ‘development’, when this is enacted in ‘structural adjustment’. There are similar problems throughout Africa, Asia and South America.

This led to an interest in combating climate change through structural change. She was involved in the UN framework on climate change in the Philippines from 2007 to 2009 and worked as a consultant for the Filipino delegation.

Large international meetings display an imbalance between North and South. Northern countries – and some other large nations, such as China – have huge delegations; other countries much smaller ones. Delegations mainly represent the views of a country’s middle and upper classes, and are unaware of how things are at the sharp end of crises. They present the views of the Chamber of Commerce rather than civil society, and sign up to what they are prepared to do, not what they need to do.

After colonialism, in the 60s and 70s, ‘development’ was still conducted very much along the lines of the Western model. Allende (for example) talked about the need to regulate corporations at the UN, but this was delegated to UNCTAD and agreement was very difficult.

The same problems beset the issue of controlling greenhouse gas emissions at the time of the Kyoto protocol.  Every country was required to sign up to reduce its emissions. This is a step beyond the much later Paris agreement, which is voluntary. Rich countries had become less persuadable because of the influence of transnational corporations (TNCs).

The notion of ‘climate debt’ is becoming more important in the thinking of the global South. No rich country has been prepared to accept that they owe a climate debt to developing ones, but progress has resulted from poorer countries working as blocs. The Marshall Islands, the Maldives and some other small states formed a bloc to press for climate mitigation in 2017. This is even including funding the movement of entire populations from some low-lying small islands to larger and higher ones.

They are dedicated negotiators but they need to be.  They risk losing everything. The movement is helped by children and young people who take part in the global ‘youth strikes for the climate’.

The Philippines have always had typhoons.  But they’re more frequent and ferocious now. Dorothy’s family has had to move to higher ground to escape three times since the typhoon of 2001.  Her mother lives in a 4th floor apartment and may need to move again. The family has the resources to move, but many can’t. The archipelago can also now experience night-time temperatures above 35oC.

Global Justice Now is highlighting the link between trade and climate change. Global trade deals are increasing the power of TNCs even further, particularly through investor-state dispute settlement courts (ISDS , effectively ‘corporate courts’).  There have been ~1000 ISDS cases since 2005, mainly aimed at the governments of southern countries, and they have often been forced to legislate to promote carbon-generating activities such as coal extraction and logging. Progressive governments that have moved to limit these activities have been sued for huge sums. Even Germany and the Netherlands have been sued for commitments to stop burning coal and oil by 2026 and 2030 respectively. We in the UK are now facing a potential UK/US trade deal with ISDS in it.

So, whatever progress is made to clean up the environment and reduce emissions, trade is set up to frustrate it. The UK’s lukewarm commitment to achieve 0% carbon emissions by 2050 is under threat, and this target already has lots of loopholes: it doesn’t include import/export, aviation, shipping, or fossil fuel investment in other countries.

Corporations have a worse record and are more of a threat than rich countries. The emissions of BP and Shell together are four times those of the UK as a whole. To reach 0% emissions, we will need to target those corporations. Technically, we have the solutions – solar and wind power are becoming very cheap and easy to produce – but we need to curb the power of the extractive corporations. Civil society and some governments in southern countries are very clear about this.

There is a glimmer of hope in the new social movements that are springing up all over the world. At the very least, the climate emergency is now towards the forefront of all our minds. The struggle of indigenous leaders in Brazil, the Philippines, Colombia and elsewhere who were killed fighting for the environment lives on.

The kids’ street protests are right. More is needed than ‘lifestyle solutions’.  For a start, lifestyle choices won’t work unless backed up by policy.   Taking a train needs to be made cheaper than taking a plane. 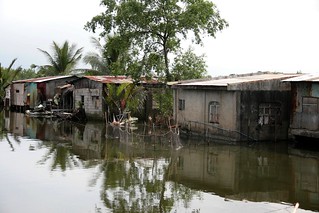 hear Dorothy Guerrero (Global Justice Now head of policy & advocacy) on corporate power in climate politics, drawing on her long experience in Asia & elsewhere in the South. She will focus particularly on why mining companies and trade deals are such obstacles to achieving climate justice.

To be followed by discussion, and more networking.

The venue is situated approximately 1 mile from the railway station and half a mile from Cambridge Leisure.

Citi1 or Citi7 along Hills Rd to Blinco Grove & walk down Hartington Grove.

Alternatively, the venue has a small car park.

On 20 October, a group of people gathered in Cambridge to think about ways to challenge the Government’s ‘hostile environment’ for migrants and refugees.  They had some ideas.  On 24 November, they’ll be meeting again to look at ways to take those ideas forward.  13:00-15:45, Mill Road Baptist Church Hall.  Book at http://bit.ly/2zBOgLR .  See you there!

Here are pictures from the Cambridge demo against Donald Trump’s visit, on the evening of Thursday 12 July.  Spot the veteran Global Justice Cambridge activists involved, albeit in different hats.  Longstanding group friend Sue Woodsford is the Statute of Liberty, collecting signatures for an Amnesty petition. 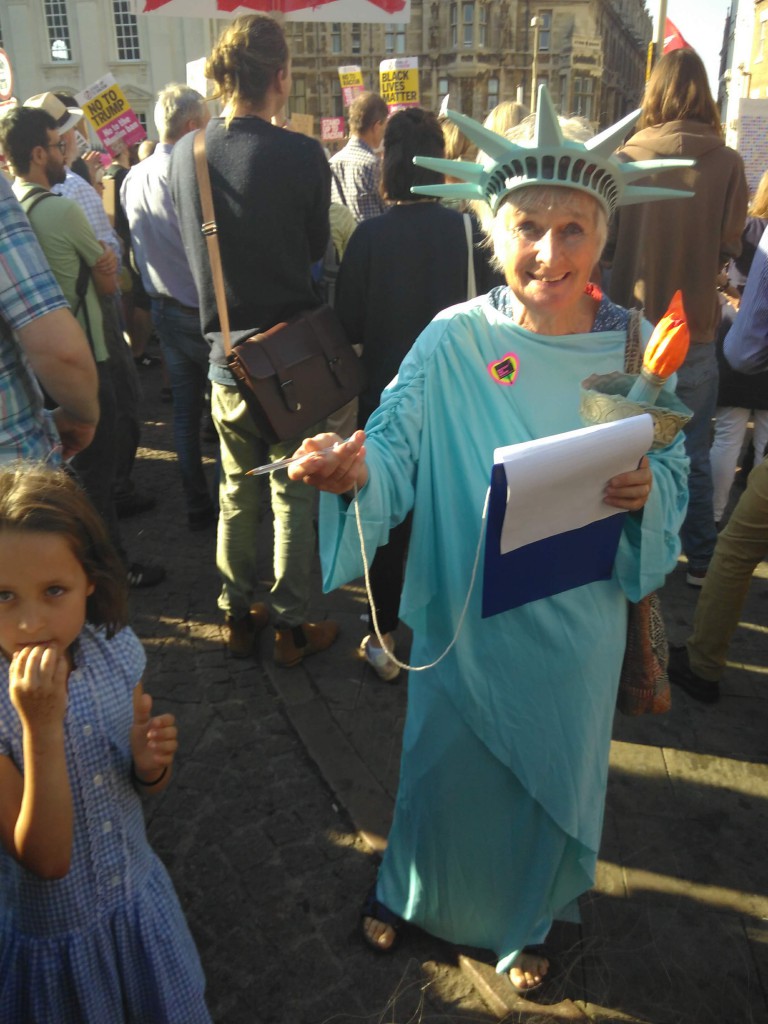 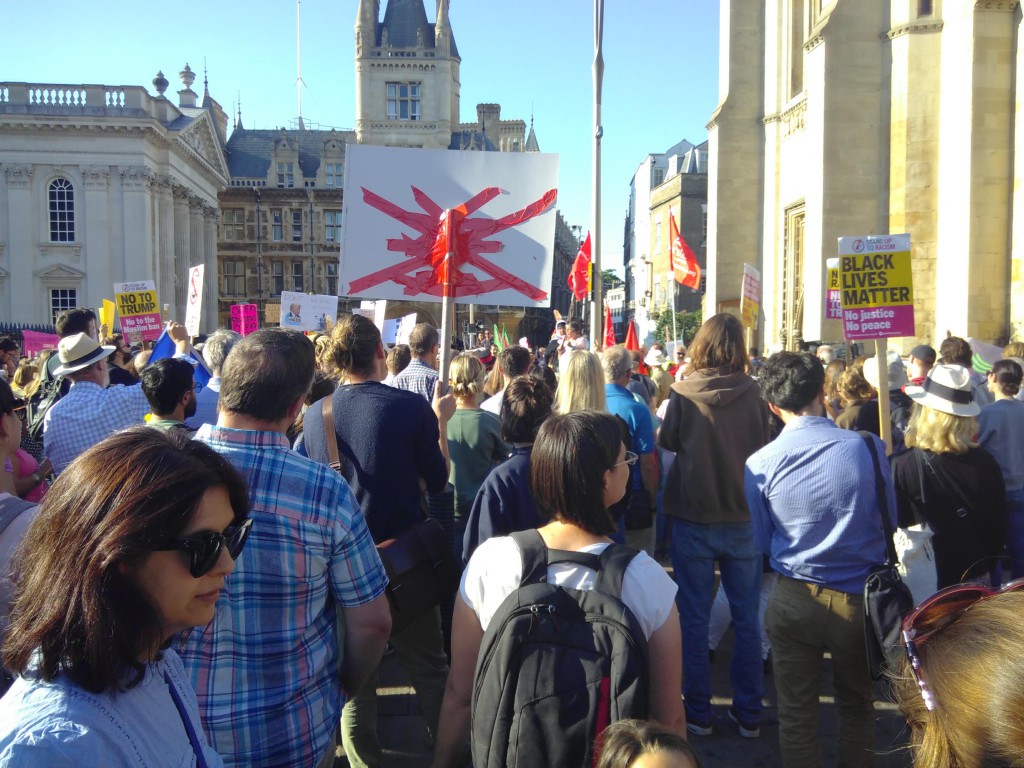 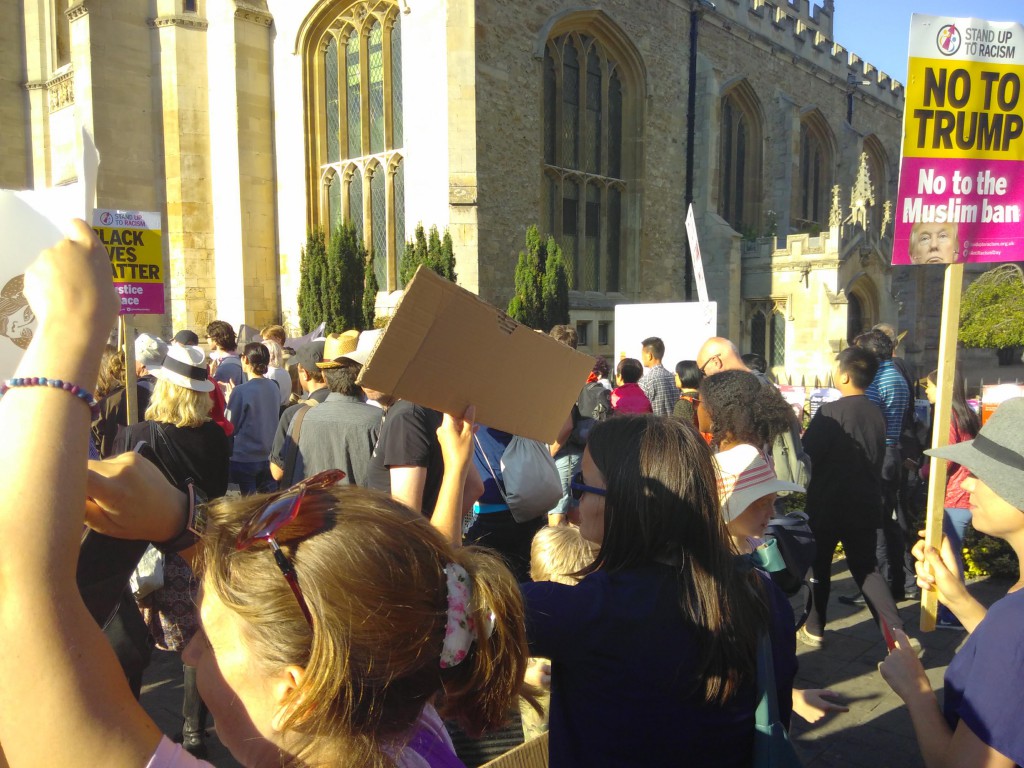