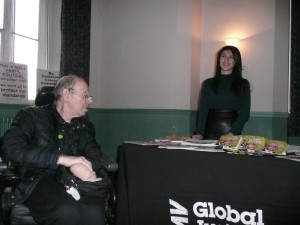 We had our stall out again this month, campaigning to alert people to the dangers of a post-Brexit trade deal with the US and enjoying the sounds of a steel band and a community choir.

Fairtrade can be regarded flippantly as an indulgence by the middle classes wanting to assuage their consciences by spending a few pence more on nice chocolate, wine, craft or textiles.

But although nobody ever gets rich from being a FT producer, the dividend paid and (self) respect accruing from having a fixed contract and not being at the mercy of manipulated markets is in itself not only a moral and morale good, it puts children in school and food in their bellies. And decisions made by community groups on the ground as to how they spend their money gives ownership and security to development projects such as clinics, infrastructure such as water supplies and roads, and training and communal workshop facilities.

So it’s natural that whatever the “mainstream” campaigns Global Justice Now is running, each year GJManc. tends to do a campaign action for Fairtrade Fortnight. This year the campaigning side of FTF was more in evidence with a petition calling for guaranteeing a “living wage” for chocolate producers under the hashtag #Shedeserves.

To this end we ran stalls on Friday and Saturday in Chorlton, picking up customers going to Unicorn on Friday and some ward councillors and Saturday shoppers. Initially leading with the FTF card, we followed up with GJN #StopISDS campaign cards, making the point that ISDS could stop the City council favouring Fairtrade (as well as a number of other evils).

This worked well. People knew about FT and trusted it, appreciating the rationale of the campaign and its going beyond feel-good shopping; that done they were receptive to learning about the Trade (In)Justice potential of ISDS.

We also invited people to pose for photos (for tweeting) with messages and thereby promote this campaign further and reduplicate the effort. Chorlton councillors were happy to do so, and may be helpful in the future if their support is needed.

The stop ISDS petition is here

Is Fairtrade worthwhile? See the discussion on the GMTAN Trade Action Blog 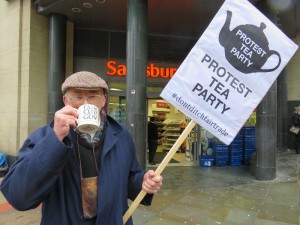