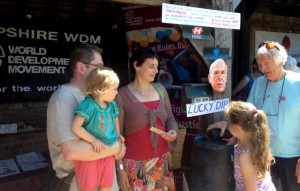 Members of the Shropshire group treated visitors to the Green Fair at the Shropshire Wildlife Trust to an unconventional lucky dip, complete with oil slick and coal dust sweets, highlighting the relationship between controversial coal, oil and gas projects around the world and the UK financial sector.

The lucky dip revealed fossil fuel extraction projects around the world which are displacing local communities and polluting their environments without bringing them the benefit of affordable energy. These are projects which are contributing to an increase in global carbon emissions and ultimately climate change, too.

The lucky dip also revealed which financial institutions are investing in these projects, and the group collected signatures from Green Fair visitors for a petition to Business Secretary Vince Cable, urging him to make it obligatory for banks and pension funds to report not only the carbon emissions resulting from their office light bulbs, but also the emissions of the dirty energy projects in which they are investing savers’ and borrowers’ money.

If savers and borrowers have this information, they will be able to choose whether they place their business with banks heavily involved in fossil fuels or with banks backing development of green energy. As it stands, billions of pounds are being poured into coal, oil and gas projects, dwarfing investment into renewable or alternative energies, all at the expense of our planet, communities around the world today and future generations.