Instead of condemning many to death, like the UK Export Credit Guarantee Department’s dodgy deals, the grim reaper convinces Manchester’s Piccadilly gardens of the need to cancel third world debt

Knutsford- believed by some to be named after Cnut/Canute- might not be Paris but did provide GJ Manchester and supporters with a significant venue for a solidarity demonstration at the end of the COP21. It seemed our social media announcement had been picked up by the Police as we were met by a modest presence of PCSO and constable who just happened to be standing around in the rain for no obvious reason.

Difficulties finding an iconic and relevant target where there would be significant foot-fall on the right day in Manchester led us to decide to invite others to come out of town with us to where George Osborne has his constituency office with a message asking him to recognise as Canute did that you can’t ignore or boss nature- though you can mess it up with fracking, subsidies to fossil fuel companies, and irresponsible corporate exploitation.

Some participants dressed in red and had produced their own placards whilst others dressed as businessmen to oppose them and turned up in continuous rain which put a damper on deploying our giant prop, the “grim reaper”.

George wasn’t in when we called- though a couple of eastern European cleaners were getting the Conservative Club ready for a letting that evening so we focused on being seen by passing traffic. We were also seen by enthusiasts for high-performance sports cars who were gathered across the street at the McLaren showrooms where some rather expensive machines were being shown off. We resisted the temptation to pick a squabble and stayed on message- being rewarded by Stavros Lynch from Ireland who had come to see the cars.

He shot a spontaneous film and interviewed three of us, subsequently posting it on his facebook page (Stavros969) and letting us know where to find it. (It can be seen on facebook.com/GlobalJusticeManchester/.) This was great as the expected photographic support hadn’t shown up and we were scratching to get materials with a couple of us having to come out of the protest line-up to take snaps.

There were few pedestrians near us so we offered copies of the COP21 Times to drivers stopping at the roundabout and after a couple of hours packed up to go home, dropping a copy of the paper through the Constituency Office letterbox.

Moral: If you don’t get it right, do what you can, and have another go afterwards, learning from the experience! 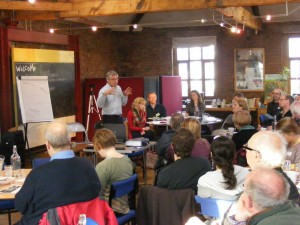 Kindling Conference on Solving Inequities in the Food Production

The ‘Making Food Fair’ conference, hosted by the Kindling Trust, took place on Saturday 22nd November, bringing together a fantastic range of speakers with over 70 people to explore the inequities of the current food system.

The event provided an opportunity to explore how we can make our food system fairer and more sustainable across the whole food supply chain.

This broader perspective opened up the discussion to consider how our food system is perpetuating poverty for UK farmers as they struggle to make a living, whilst at the opposite end of the food chain, many families are unable to afford healthy food.

With our food system continuing to fail so many, it is essential that we continue to discuss ways in which we can work towards a more equitable system.

Making Food Fair provided a brilliant platform on which to do just that. The broad range of perspectives covered by the speakers, alongside the diversity of those attending the event, made for an exciting and inspiring exchange of ideas in the afternoon group discussions.

The presentations from all of speakers were filmed on the day, and will be posted online soon.

In the meantime, to get a snapshot of the day check out #makingfoodfair on twitter, or to find out more about how The Kindling Trust are working to make food fairer in Manchester, visit www.kindling.org.uk.

Photo: Ali Abbas of Manchester Friends of the Earth

Manchester being the place it is, you can find all sorts of causes and campaign groups through the internet and networks, but fail to interact with them in the integrated way some fondly enjoin groups to do.  So, whilst putting out feelers and finding our inboxes and facebook pages flooded with postings from worthy groups you don’t like to cut out, we ended up using personal contacts and experiences to help us launch the new Agribusiness campaign on a wet Saturday morning in suburban Manchester.   Our photographer and webmaster being kept in by the domestic priorities we turned to our friends in SPEAK and FoE (with whom we have built relationships through the Climate Act and RBS Tar Sands campaign) and they bolstered numbers and took photos. (Thanks Ali for the photos!).

In his first campaign action with us Eric Mulvihill explained his motivation: “This campaign is important to me because I support small farmers everywhere, for two reasons: firstly my own ancestors were small farmers in the West of Ireland and secondly, we need an antidote to capitalism and small farms are the perfect answer.”

Another member who had spent years living in Africa, and who regularly goes back to Uganda could give personal testimony to reinforce the findings in the report we gave John Leech MP On the Carve up of Africa by large Corporations (see the new campaign at http://www.wdm.org.uk/food).   John Leech gave the commitment: “I’m very happy to support this campaign.  Taxpayers’ money should be going to help the poorest people in Africa support themselves sustainably rather than lining the pockets of rich corporations.  I support the principle that people should be able to grow the food they want.”

Warm and useful words, for which we thanked him.  Yet we also warned him that we would be behind him (looking over his shoulder) to call on him to convert his words them into more specific action relating to food sovereignty- an issue of interest to his constituents as well as people facing predations from multinationals in Africa.

Being part of WDM Manchester’s action on 21 December was a fascinating experience for me.  I dressed up as Father Christmas [which I had never done before], and marched along with the group through St Ann’s Square to HSBC bank, and went to go in.  I was stopped at the door, and simply asked if I could see the manager because I had something for him, and immediately the doors were shut in my face.

I thought the manager would soon appear and sort out the difficulty, but nothing more happened.  I stood waiting to go in, with a gathering crowd of others wanting to go in and use the bank, and looked through the glass doors to see those who were in the bank already also queuing to get out.

No reasons were given for this stalemate, and so we might have remained for a long time, except that the local community police, concerned at the gathering crowd, were allowed in, and then came out to tell me that the bank was not going to let me in – no reasons given – so I ought to move out of the way.

The bank was prepared to stay shut for half an hour on a busy pre-Christmas Saturday rather than risk talking to a diminuative Santa Claus!  It smacks of a guilty conscience to me, they must have known they were on Santa’s ‘naughty’ list, and did not deserve their present.

– Exploring the issues and responses to food insecurity in the developing world, Sat. 16th. Nov. 2013.

Over 100 were present and they took virtually all the good WDM materials made available, leaving just a couple of cards!

The main speaker Patrick Mulvany – Senior Policy advisor for Practical Action – was excellent, but two of the International NGOs leading workshops (OXFAM and ACTION AID) really added little to the aims of the conference and some of us thought they must radically change their approach if they were to positively support small holder farmers. I got the impression some of the NGO staff themselves have (private) concerns at the direction they are taking!

In contrast CAFOD was pretty good as it had a policy of listening and working in real long term partnerships with smallholder farmers that supported the concept of food sovereignty, which Patrick Mulvany was rightly promoting as the only sustainable way forward. At the plenary sessions some of the assembled folk seemed to fail to understand that the main problem was here – in the way we want cheap, poor quality food, from wherever, which we often waste. They were a little put out by the suggestion that they should work for change here and not concentrate on there and it is they/us that have to change not them.

Luckily the main speaker totally supported this view, just more politely, by emphasising how the smallholder farmers around the world were getting organised and fighting for their own food sovereignty away from big Corporate and Government control! He pointed out a growing amount of our aid money was supporting Corporatism to force/encourage small holder farmers to allow industrialisation of food production for our benefit and not theirs in the end.

On the current situation with most International NGO’s he suggested we must all read John Hillary – “Putting Politics back in” just published: http://progressivedevelopmentforum.wordpress.com/2013/11/04/putting-the-politics-back-in/

The main conclusion for me (supported I gather by an evaluation about to be published) was the IF campaign has only promoted Cameron and virtually nothing else of any use as far as smallholder farmers were concerned. People had been conned and I was pleased WDM had kept out of the IF campaign. It was typical of the conning of such good people who mean well by, for example, continuing to support more aid without seeing how it is currently often being adversely utilised. Many people were left thinking this even if emotionally they found it difficult to accept.