They don’t know when to quit!  Following the Global Justice Now national activists meeting on the eve of the Tory Party conference, commuters outside Manchester Piccadilly railway station were treated to another puppet show.

This time, activists from Sheffield and Nottingham took part, as David Davis and Liam Fox danced at Trump’s orders, while passers-by took photos and signed Dangerous Deals in the Dark postcards to send to the Trade Secretary, demanding transparency in forthcoming trade deals.

Trade justice campaigners joined tens of thousands who protested against British Government policies at the opening of the Conservative Party Conference in Manchester on Sunday.

At the opening rally in Castlefield Basin, members of GMTAN and Global Justice Manchester were busy encouraging people to send post cards to the Trade Secretary demanding democratic oversight of the new trade deals that the Government is already negotiating with dangerous dealers such as Donald Trump.

Trump, swinging a chlorinated rubber chicken and promising “great trade deals” was a particular attraction, with many people wanting photos of themselves in his company.

The march, set off up Liverpool Street, passing the conference venue before heading for the closing rally at Piccadilly Gardens.  The GMTAN/GJM contingent formed a notable presence.

Liam Fox was also spotted sneaking around and sucking up to Trump, no doubt plotting how best to sell off the NHS to US corporations.

Over the past few months we’ve seen trade minister Liam Fox has been cosying up to authoritarian leaders around the world, claiming new trade deals can be the solution to our post-EU problems. Yet current rules allow the government to strike these deals without any public scrutiny or parliamentary oversight. We stopped TTIP – but now we need a democratic voice in trade policy to ensure it puts people before profit. You can read more about the campaign on our website.

On the demo we’re going to be talking to as many as we can about the campaign, getting our ‘deals in the dark’ petition signed and taking part in a creative stunt posing the question ‘who’s pulling the strings in our trade deals’. If you’d like to take part in the stunt please come dressed in a suit and we’ll provide you with the rest. If you’re not up for the stunt no problem, just come dressed as yourself with any home made placards, campaign t-shirts, noise makers and anything else that you’d usually bring to an event like this. We’ll be providing the ‘deals in the dark postcards’.

The full plan for the day is as follows:

Thanks for everything that you are doing already and hope to see you at the protest.

We will be at the demonstration and counter-festival outside the Conservative Party conference next month, doing stunts and collecting signatures on our trade democracy petition.

Help us Take Back Manchester on Sunday 1 October, outside the Conservative Party conference at Manchester Central Conference Centre.  We’d love for activists from outside Manchester to join us too.  If you’re interested in getting involved, email us.

We were out doing street tableaux with Greater Manchester Trade Action Network this month, highlighting Dangerous Deals in the Dark.  Our puppet show illustrated the power of both the US and corporate capital over our government.  Look out for further appearances on the streets of Manchester in the coming weeks and months. 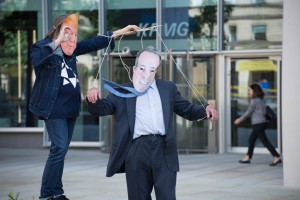 Donald Trump pulls Liam Fox’s strings outside the offices of KPMG, a major lobbyist of the UK Government

More photos at the GMTAN blog and our Facebook page, plus full report in The Meteor.

Global Justice Manchester’s stall at the ‘Another Europe is Possible’ conference at the Museum of Science and Industry on April 1st was a great success.

But perhaps the most appropriate comment came from Mark Wiseman, who spared no effort to demonstrate his Disgust