Great day at the Glasgow Mela on Sunday, closing out this year’s Refugee Festival Scotland. Refuweegee, Refugee Survival Trust and Scottish Detainee Visitors represented as well.
We collected hundreds of signatures to end the hostile environment around migration. You can sign the petition here:
https://act.globaljustice.org.uk/sajid-javid-stop-hostile-environment-all-immigrants-0
Also, loads of selfies saying #time4atimelimit and to #endindefinitedetention for migrants in the UK, the only country in Europe where indefinite detention for migrants is still ongoing. Take you own selfie and send it to the Home Secretary and your local MP to call for a 28 day limit on detention. 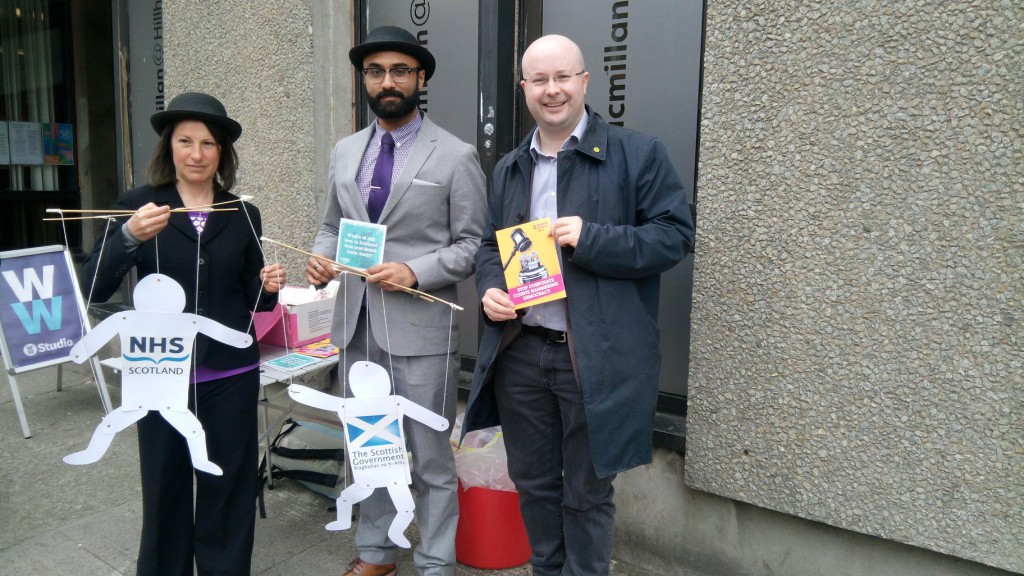 On the Byres Road outside Hillhead Library on Saturday, 8th June, talking to people about a US-UK trade deal that could see chlorinated chicken on our supermarket shelves, US corporations in our NHS and a whole raft of our laws and regulations challenged in international corporate courts.

With Theresa May stepping down, this is even more likely under her successor.We can’t let that happen. Sign the petition to oppose a toxic US-UK trade deal now:

We also had a visit from Patrick Grady, MP for Glasgow North to give his support!

A good day out with our friends from the Unions for the May Day March and Rally earlier this month. Shame there wasn’t more wind to keep the flag flying properly! 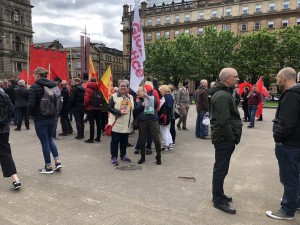 Never doubt that a small group of thoughtful, committed citizens can change the world; indeed, it’s the only thing that ever has.
Margaret Mead 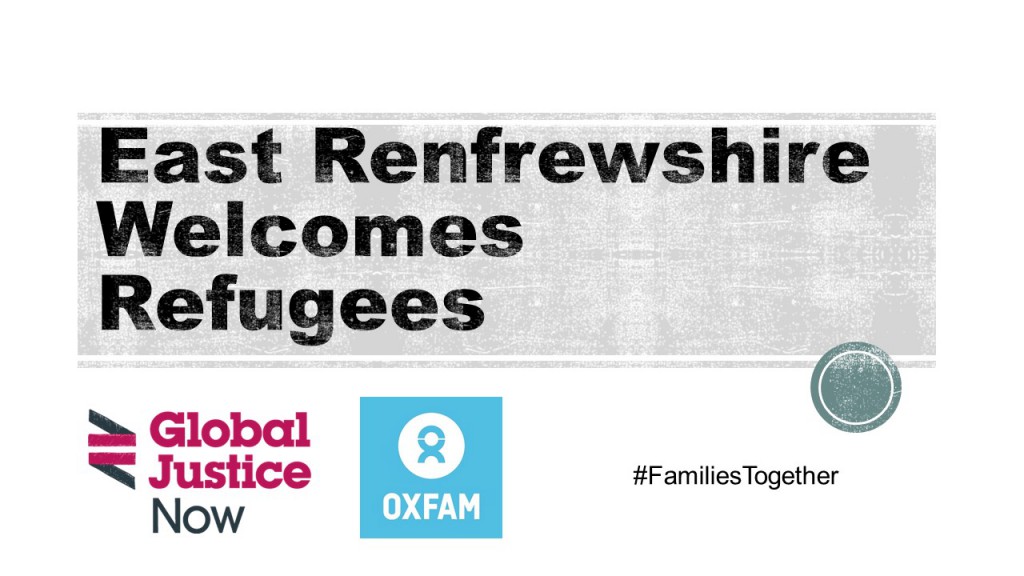 Community spirit, passion and hope filled Clarkston Hall last Thursday, 21st February where people from East Renfrewshire, Glasgow and much further field gathered for an evening jointly organised by Global Justice Glasgow and Oxfam Scotland to watch a documentary, engage in some activism around migration and much more.

‘Human Flow‘ is a beautiful and poignant documentary from legendary Chinese artist and dissident Ai Weiwei. It showcases, through its stunning cinematography and incredibly moving scenes, the plight of thousands around the globe as they struggle to make, often dangerous and life-threatening, journeys in the struggle for survival and in the hope of a better life. We screened the first two chapters showing harrowing scenes from Lesbos and Bangladesh. The sheer scale of the crisis was brought home with full impact. Without narrative or much comentary, it very simply shows us the what is actually happening on the ground and does not let us put our head in the sand but instead confront the suffering of so many and why we need to act now.

The refugees shown in the film and coming here to the UK include adults and children whereby, as it stands, a child who is granted asylum cannot sponsor their parents to allow the parents to join them in this country. This is one of the restrictions on seeking asylum in the UK as well as access to the legal aid for such processes and others that the Family Reunion Bill seeks to rectify. One focus of the evening was to encourage people to contact their local MP, to urge them to support this bill and other measures that aid those seeking asylum and aid with settlement.

Usman Aslam and Sara Cowan provided their expertise on the issues at hand as well as providing input into discussions throughout the evening.  Sara is a campaigner with Oxfam’s humanitarian advocacy team working on priority campaigns Stand as One with refugees and Oxfam’s Yemen campaign. These campaigns work to ensure people affected by conflicts & disasters have a right to live in safety & dignity, free from violence, to have clean water, shelter & food, & for people to have to be heard & to take control of their own lives. Sara spoke of her work as a campaigner, the challenges being faced in this sphere, the current work being done around the Family Reunion Bill as well as other issues relating to asylum and refugees.

A regular contributor to BBC Radio, STV and the National on Immigration and Asylum matters, Usman is an Immigration & Asylum Solicitor at McGlashan MacKay Solicitors specialising in Family Reunion, Entry Clearance, Appendix FM, and Asylum Appeal. He provided his legal experience with immigration issues, asylum applications etc. and what difficulties the law creates around helping the people who need it. Both speakers took questions to clarify and weigh in on people’s concerns in this area.

Some split group discussion allowed everyone to discuss three different areas of migration campaigning – changing UK laws in this area, local action to welcome refugees and considering a world with open borders. The conversations were lively and revealed much of what people have in common in how they want to help others and the common reverence for human dignity which must be respected, no matter where someone is from or what circumstances brought them to the country.

We were lucky to have people attending with recent experience of going through the asylum system to offer their story and perspective to bring to light how the process actually plays out for a refugee in the local area, as well as people who had recently been to refugee camps in Lebanon. We were also provided some delicious Iranian/Middle Eastern desserts by Aziza which were a huge hit and enjoyed by all throughout the evening.

One of the most positive outcomes of the evening was to see people engaging with each other on these issues and organising themselves for future events and activities. This varied from people from East Renfrewshire banding together to pursue further action collectively to people running various other projects linking up with both Oxfam Scotland and ourselves for resources and guidance.

Click here to sign the petition to the Home Secretary to stop the hostile environment for all immigrants.

Many thanks to Oxfam Scotland, specifically Meghan O’Neill, for all her support in organising and co-hosting the event, to Usman and Sara for their input and, most importantly, to those who attended the event and contributed their ideas and their enthusiasm to make for a wonderful, informative and inspiring night for everyone.

Want to show that you stand in solidarity with refugees?

Then join us for this interactive evening aimed at ensuring East Renfrewshire is a welcoming place for people seeking refuge.

We’ll be screening a short sample of Oscar-nominated Ai Wei Wei film Human Flow and discussing what action we can take locally to make our community more hospitable.

You’ll also have the chance to hear about the harsh realities faced by refugees arriving in the UK who are prevented from reuniting with their loved ones, and find out how your support of the #FamiliesTogether campaign could help overturn these cruel rules.

In this mad Brexit

We get up each morning and

We meet at 6pm on the third Tuesday of each month to plan our actions and events. If you want to find out more, contact us by email.