Bexhill and Hastings WDM at the Copenhagen Climate Conference

Before the Copenhagen Conference

Marking the end of the European Social Forum, November 2003.

Putting Parliament in the picture 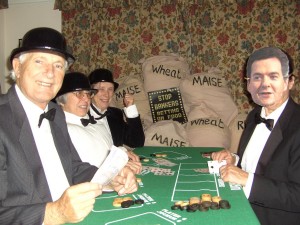 Bexhill and Hastings WDM played ‘Human Blackjack’ with George Osborne, to show how our government allows bankers to continue betting on food prices.

Bexhill and Hastings WDM group member,Denis Lucey, who lives in Bexhill said: “Our message is that gambling on food isn’t a game. It causes sudden food price hikes that lead to starvation, riots and political instability for people in developing countries. And this gambling is making UK basics such as bread, cereal and meat more expensive at a time we can least afford it.

“We want thousands of people to play Human Blackjack to ensure the Government hears the message loud and clear that the UK public supports regulation and increased transparency of an unfair financial market.

“George Osborne is attending a meeting of EC leaders in Spring 2011 when he has the opportunity to agree to regulate food speculation. We are urging the UK public to show that the bankers don’t hold all the cards by playing Human Blackjack and signing up to support the campaign to Stop Bankers Betting on Food at www.wdm.org.uk/humanblackjack.” 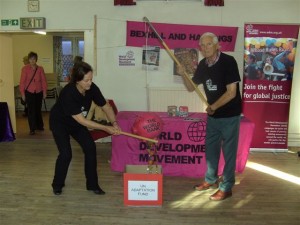 WDM’s contribution to Bexhill Fairtrade Town celebration “Peacing Together One World”, in October 2010, highlighted two alternative approaches to the management of climate change resources.  On the one hand, the World Bank Pilot Programme for Climate Resilience offers half its money as loans – to nations hard-pressed to repay.  On the other hand, the UN Adaptation Fund offers grants on a non-commercial basis to those most in need.  The UK government has given £440 million to the World Bank (out of the aid budget!) but a loan (!) of only £660 thousand to the UN Adaptation Fund.

Our symbolic piggy bank,  filled with gold chocolate coins, represented the World Bank.  When the pinata was broken the coins fell into a bucket representing the UN Adaptation Fund.

THIS MEETING IS POSTPONED DUE TO CORONAVIRUS.