Join us for an online talk by John Nightingale, Chair of Jubilee Debt Campaign Birmingham, at 7.30pm GMT on Thursday 11th February 2021. All welcome!

John plans to discuss why the current burden of unjust and unpayable sovereign debt is bad for countries in the global south and thereby for the whole world, why this need not be so, and how we could start to reverse this trend. There will be plenty of opportunity to ask questions and join in the discussion.

Jubilee Debt Campaign Birmingham is part of the national organisation Jubilee Debt Campaign (JDC). JDC works to end poverty caused by unjust debt through education, research and campaigning. It is in turn part of the global movement which is demanding freedom from the slavery of unjust debt as well as a new financial system which puts people first.

This free online talk will be held via Zoom video conferencing. Please email us at Global Justice Shropshire, shropshire@globaljustice.org.uk , to request the link to join the meeting or any other information.

We will only hold your personal data for the purpose of corresponding with you about this talk or responding to your query. We will not share your data with any other organisations.

Update: the video of John’s talk is available on our new YouTube channel. 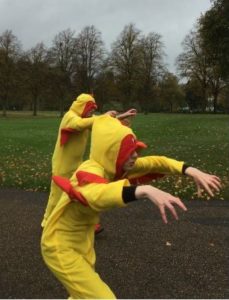 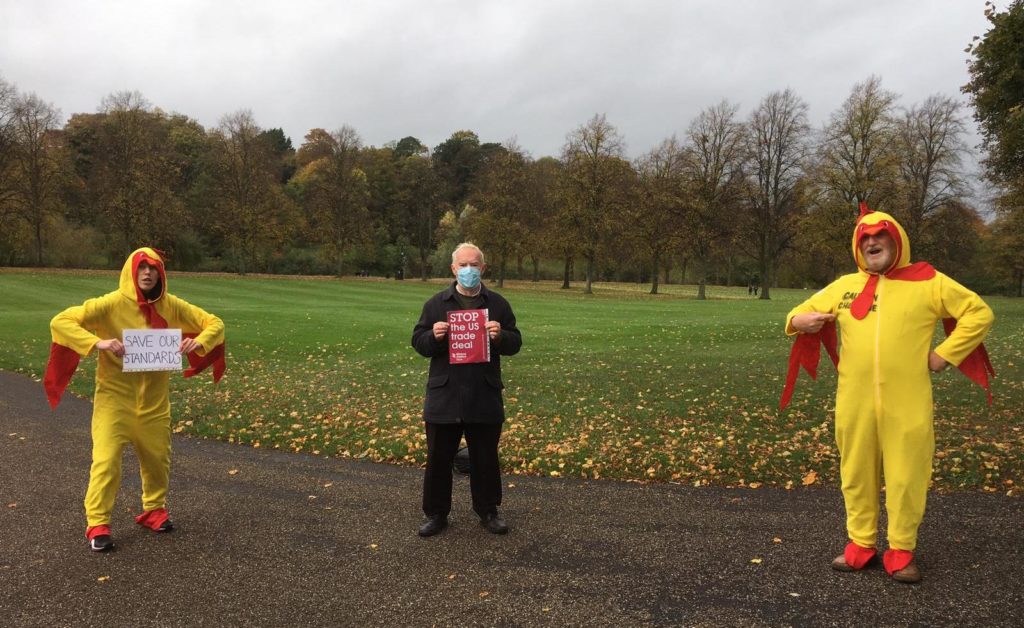 All are welcome to join us at Global Justice Shropshire for an online presentation and discussion at 6.30pm on Thursday 14th May 2020. 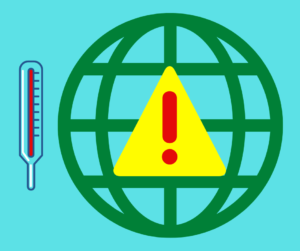 Dr Andrew Harmer will introduce and take questions on his recent article in The BMJ, titled ‘WHO should declare climate change a public health emergency’.

Andrew will also reflect on the role of WHO (World Health Organization) in the global response to the Covid-19 pandemic.

Participants are encouraged to read Andrew et al’s article in The BMJ in advance.

This meeting will be held via Zoom video conferencing. Please email us at shropshire@globaljustice.org.uk to request the link to join the meeting.

Join us for an online talk by journalist Sue Branford at 6.30pm on Thursday 30th April 2020. Sue will discuss the social cost of our consumer electronics for the people and the environment in the Brazilian Amazon.

Sadly, Sue will also touch on the coronavirus pandemic, as the first case of Covid-19 among indigenous people in the Brazilian Amazon was confirmed on 1st April.

Sue has reported on Brazil and Latin America for the Financial Times, The Economist, The Times, The Guardian, the BBC, the New Scientist, the Latin America Bureau and Mongabay over her career and has written several books.

What: The Social Cost of Our Flat Screen TVs: Bauxite Mining and Aluminium Production in the Brazilian Amazon
Online public talk by journalist and Latin America specialist Sue Branford, following her latest field trip to the Brazilian Amazon at the beginning of the year. Around 30-minute presentation followed by question and answer session.

Where: Online via Zoom video conferencing.
*To join the online talk, follow the up-to-date link shortly before the start time.
*To receive this link, please email us at shropshire@globaljustice.org.uk .

Rapid deforestation of Brazilian Amazon could bring next pandemic: Experts

‘They are invaders’: Brazil indigenous group takes on mining giant

‘This is a fascinating, important and astonishing account of the battle to save the living world and the future prospects of humanity.’
George Monbiot, journalist, activist, and campaigner

Hear Global Justice Now Director Nick Dearden speak about “Brexit, Trump and Climate Change” in Shrewsbury on the historically charged date of 5th November. Pulling together the threads of these three issues, Nick will give his insights on how we got into our current mess and, importantly, how we can get out of it. 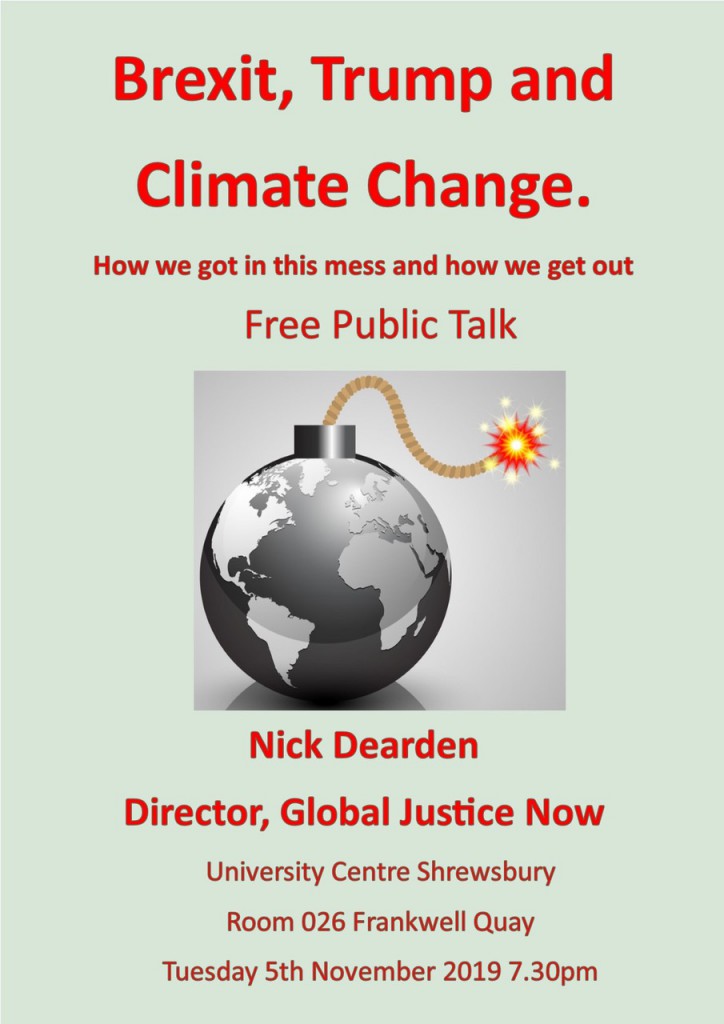 Join us for this free public talk at University Centre Shrewsbury, Guildhall, Frankwell Quay, Shrewsbury, Shropshire, SY3 8HQ, from 7.30pm on Tuesday 5th November 2019. There will be plenty of opportunity for questions and answers. Everybody is welcome. Seats are available on a first-come, first-served basis on the night. Please email shropshire@globaljustice.org.uk with any enquiries. 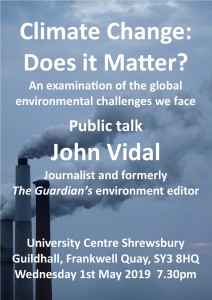 Journalist John Vidal will examine the global environmental challenges that we face in this public talk. John, formerly The Guardian’s environment editor, will share his informed insights and respond to questions from the audience.

This talk comes ahead of the publication of a major report by the Intergovernmental Science-Policy Platform on Biodiversity and Ecosystem Services (IPBES).

Everybody is welcome! Seats will be available on a first-come, first-served basis.

Entry: Free of charge. Attendees will be able to make a small contribution towards room hire, if they wish. This is on a purely voluntary basis.

Co-organisers: Global Justice Shropshire and Friends of the Earth Shrewsbury .

Update: see this event and Shrewsbury namechecked in this Guardian article!