You are here: Home / Home

We are invited to get involved in some local actions:

Climate Action has decided to start running regular silent vigils on the climate focussing on specific topics. They will run at 12 noon-1pm on the 2nd Monday of each month, and 5-6pm on the 4th Friday of each month from September, and you can find information about them on our website here.

The launch vigil will be noon-1pm at the clocktower in Leicester on Sat 21st August. It will focus on the impacts of the climate crisis in various parts of the world (fires in Siberia, typhoons in the Philippines, disease in Bangladesh, floods in Uganda, mud slides in Japan and so much more). It’s a great chance to get new people thinking about the climate and also to get to know each other (chatting afterwards and before – not during, as the vigils are silent). We are asking you to wear black or white as we want to stand out as a group. Please bring someone with you if you can. We will make and bring a set of matching placards and also flyers.

Please come and stand up for the people and places across the world suffering from the climate crisis right now. 12-1, Sat 21st August, Leicester Clock Tower. Wear black or white.

Leicester Friends of the Earth have launched a petition asking Leicester City Council to stop spraying pesticides, and we are asking people who live or work in Leicester to sign it (using their Leicester postcodes). You can find it here.

Message from Leicester Friends of the Earth:

“The City Council say they are minimising the use of weedkiller around Leicester but we are still seeing unnecessary spraying. Being exposed to pesticides has been linked to many health problems, including cancers, Alzheimer’s, asthma and fertility problems. Glyphosate, the weedkiller used in Leicester, was recognised as a carcinogen by the World Health Organisation in 2015. Children are particularly vulnerable to pesticide poisoning because their skin is more permeable and they spend more time playing close to the ground.

“Biodiversity and the natural world are is already stressed by the climate crisis and don’t need spraying poisons to make it worse.

“We understand that it is necessary to remove plants from pavements to stop people slipping but why spray in parks and green spaces? Does it really matter if wild plants grow around trees or fence posts? We need more space for wildlife in our city.”

In 2016 Global Justice Leicester was involved in the Global Justice Now campaign to #StopGlyphosate – due to safety concerns. It is worrying to learn that this weed killer is being used in our parks and green spaces.

The theme of the conference was ‘2021: Moment of Truth – Action for Life on Earth’

The Netherlands is being sued by two fossil fuel companies, RWE and Uniper, for phasing out coal power. 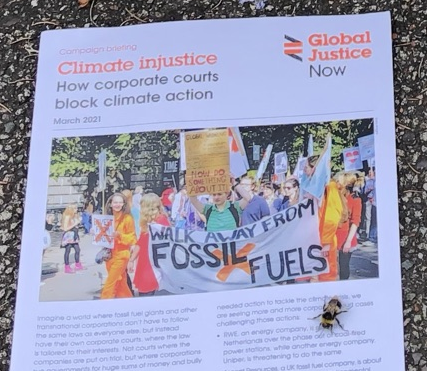 In this year when the UK is hosting the COP26 climate talks, the UK government should reject corporate courts:

Greenwashing vs Renewable Energy Generation: which energy suppliers are making a positive difference? 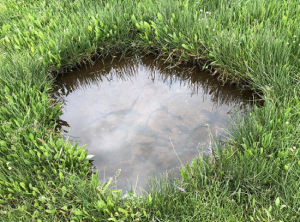 A lot of us think we are with a green energy company, but actually there’s a lot of greenwashing in this area. Climate Action Leicester and Leicestershire has just run an event to clarify things. You can see the slides (including ones not used in the actual event on other companies) here or watch a recording of the talk and debate here.

Global Justice Leicester is a member of Climate Action Leiceseter and Leicestershire (CALL).

Join with thousands of others to ask our MPs to put people, climate and nature at the heart of our nation’s recovery. 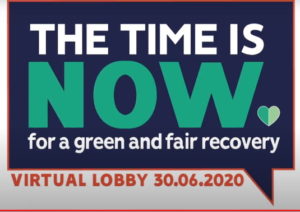 Last year were able to meet with our MPs at Parliament. This year why not join us for our first virtual lobby? Find out more about the Climate Coalition

We look forward to working with people across the region to address issues related to the climate emergency.

Climate breakdown is already wreaking havoc across the world:

Last year Global Justice Leicester campaigned for MPs to have the right to vote on trade deals before they are signed. Unfortunately, all of our work was undone when the Trade Bill was dropped before the recent general election.

The US/UK trade deal is a long term agreement that changes the lives of everyone in this country. It should not be negotiated in private away from democratic processes.

We need to keep up to date with developments and oppose any agreements that threaten the NHS, food standards or make us accept rules imposed by the Trump administration.

This meeting is being arranged with Christians Aware