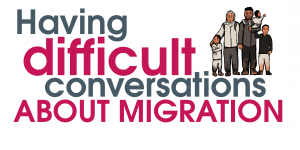 Global Justice Now and HOPE not hate are running a workshop for activists around the sensitive issue of communicating about migration. The training will be held on 8 April 2017. 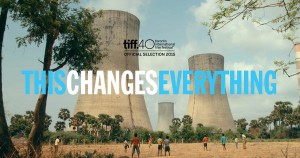 Global Justice Brighton & Hove are proud to present an OurScreen showing of the acclaimed documentary This Changes Everything, based on the best-selling book by Naomi Klein.

We’re hoping to screen the film at 9pm on Monday 22nd February 2016. But we need to sell 55 advance tickets to make it happen before we’ll be able to show the film at the Duke’s at Komedia cinema on Gardner Street in the North Laine.

Tickets are available from the OurScreen website at £10 each so please do buy in advance and then tell your friends.

Once our screening’s confirmed, come along early on the night to grab a drink and some food, meet like-minded people, and – if you’re interested – find out more about how to get involved in the Brighton campaigning scene. Then stay for the film and leave fired up and ready for change!

You can also tell us you’re coming and ask questions via our Facebook event page here.

What if confronting the climate crisis is the best chance we’ll ever get to build a better world?

Filmed over 211 shoot days in nine countries and five continents over four years, This Changes Everything is an epic attempt to re-imagine the vast challenge of climate change.

Directed by Avi Lewis, and inspired by Naomi Klein’s international non-fiction bestseller This Changes Everything, the film presents seven powerful portraits of communities on the front lines, from Montana’s Powder River Basin to the Alberta Tar Sands, from the coast of South India to Beijing and beyond.

Interwoven with these stories of struggle is Klein’s narration, connecting the carbon in the air with the economic system that put it there. Throughout the film, Klein builds to her most controversial and exciting idea: that we can seize the existential crisis of climate change to transform our failed economic system into something radically better. 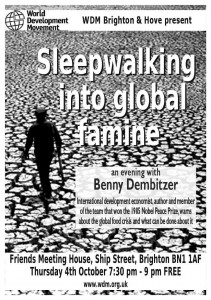 Come to our public meeting on Thursday, 4th October 2012 at 7.30 pm at Friends Meeting House on Ship Street, Brighton for a stimulating discussion about the global food crisis and what can be done about it.

International development economist and author Benny Dembitzer will talk about his new book “Sleepwalking into global famine” and Miriam Ross from the World Development Movement will talk about her recent visit to Venezuela and WDM’s food campaign.

Photos from our very well attended public meeting. Thanks to Bongani and Deborah for inspiring, educational talks, and to everybody who attended, contributed and learned. 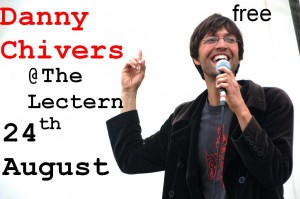 Renowned author and eco-activist Danny Chivers (New Internationalist/Newsnight/Tenner Films) will be giving a free talk at the Lectern pub opposite B&Q on Lewes Road at 7pm on Wednesday 24th August.

Danny was one of the infamous “Ratcliffe Six”, direct action protesters whose trial collapsed in January after revelations about undercover police officer Mark Kennedy.

Danny will be giving the inside story of the whole bizarre Ratcliffe affair, mixed up with slam poetry, some unlikely good news on climate change, ideas for future eco-campaigning, and cute pictures of kittens.

This year, he has also been thrown out of BP’s AGM for an anti-tar sands protest, been lightly grilled by Jeremy Paxman live on BBC Newsnight, and also launched his new book: “The No-Nonsense Guide to Climate Change”.

There’ll be an opportunity to ask Danny questions and have dinner or a pint with other like-minded people. The Lectern pub will be serving food until 9pm.

Danny’s book, published by New Internationalist, is a handy pocket guide to the whole climate issue, using friendly, jargon-free language (along with a smattering of humour, poetry and unusual analogies) to explain the latest science, politics, solutions, technologies, barriers, activism, and where we go from here.

You can read the first chapter of the book for free online, here:

What people say about the book:

“Convincing and infectious” – All Top Books

What people say about Danny’s poetry:

“A star in the making” – John Rivers, Fifth Estate

You can see Danny performing some of his poetry here:

“Lifestyle Choice” live at the G20 protests in London:

Last Saturday, on the afternoon before England’s first World Cup match against the U.S.A., we took to the streets of the city offering football fans a “pub quiz” with a difference.

We invited passers-by to pick three questions from a pot – two football-related, and one development related. Anyone answering all three questions correctly won a beer mat and a badge.

The idea behind the quiz was to promote WDM website whoshouldicheerfor.com.

The website ranks any two of the World Cup countries on social justice indicators such as money given in aid, carbon emissions per person, life expectancy and so on.

We are going to continue our street quiz in Brighton on Saturdays throughout the World Cup. To compare any two World Cup teams on social justice rankings visit www.whoshouldicheerfor.com

Three of the questions were:
1. Which is the only South American team never to have qualified for the World Cup Finals?
2. Out of all the contestants, name either of the two countries with the lowest CO2 emissions.
3. Who is the only England player to win the Golden Boot for the tournament’s top scorer?