Join us for a talk on Brazil by Sue Branford, author of books including Brazil Under the Workers’ Party: From Euphoria to Despair.
Sue will speak at the United Reformed Church in Shrewsbury from 7.30pm on Wednesday 20 April. 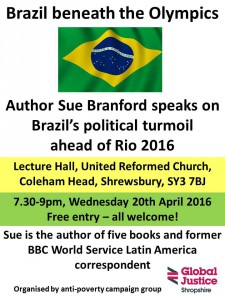 Executive Director of War on Want John Hilary sums up the wider relevance of Sue Branford’s latest book, ‘Brazil Under the Workers’ Party: From Euphoria to Despair’:

“Branford and Rocha’s thoughtful study of the rise and fall of the Workers’ Party in Brazil should be required reading for all those seeking to understand the crisis facing social democratic parties the world over.
“The party’s rejection of agrarian reform, tax justice or structural political change lost it the support of Brazil’s powerful social movements, while its recent adoption of classic austerity policies has forfeited its very legitimacy.
“The authors’ conclusion is a compelling one: for left parties, transformative social and political change is the only hope of success.”

Sue will also argue that Brazil’s political crisis has serious repercussions for the whole of Latin America, because if a right-wing president comes to power, he/she will immediately negotiate with Washington for resumption of talks on a Free Trade Area of the Americas, which is really Latin America’s TTIP (Transatlantic Trade and Investment Partnership).

Sue has recently returned from a field trip to Brazil’s Amazon and has written blog articles on the social struggles in this environmentally significant area too.