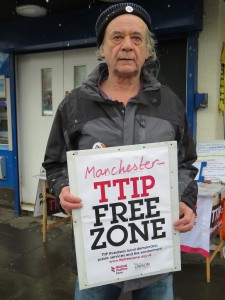 Yahoo group we used then. He came at the suggestion of a friend (Tom Skinner) and was initially apologetic for his age (then 64) as he was older than most activists he knew.

Age however never stopped his enthusiasm, nor jaded with cynicism his passion to put things right in the world.

Brian had a bumpy life. He carried the emotional scars of being separated from his family and this was doubly poignant as his childhood had been blighted by the removal of his mother. He found solace in a developed circle of friends around the world, some of whom he had met through churches, some through causes, some through the internet. (Talking with him in his last fortnight one was “paused” when his mobile brought someone calling from SE Asia to his flat on the Chester Road in Stretford. The call developed into his helping them rather than being a passive recipient of pity.)

Brian had come to Christian faith when in Bristol and this orientated the way he looked at the world and led him to be outward looking when he could easily have retreated into himself. However he wasn’t content with staying in a cosy huddle and this led to his involvement with many secular organisations and causes where he saw injustice being tackled. Some (like GJN) tackle worldwide issues, others more local such as those campaigning on homelessness or fracking.

He also had traveled widely on limited budgets and brought his memories of real experiences to support the campaigning that many of us do informed only by the proxy of NGO briefings or Guardian articles.

Living alone and on limited means he used PCs in the public library and a non-smartphone but informed himself by buying phrasebooks and atlases. Sometimes one might feel his ideas were strange- in his last weeks much of his flat was lined with aluminum foil to protect him from new generation mobile phone radiation. However he was no fool; despite having dropped out of university and worked much of his life as a bus-driver, he confidently engaged and built a reciprocally respectful relationship with his MP, Kate Green.

On the 24th. May 2019 he emailed telling of the ending of his chemotherapy. He was resigned to death and concluded:

“… I am still hopeful and comforted in the Lord. Thank you all for prayers and concerns. The Lord is good and praise Him!

His last substantial campaigning initiative was a race against time as he appreciated his days were numbered. Having worked as a bus driver for years and dying of lung cancer he felt a special burden to expose the damage caused by the particular emissions from idling buses at stops and depots. Having spoken with drivers and got nowhere with writing to TfGM, he tried to write to Andy Burnham. Defeated by his weakness stopping him concentrating at the computer, he agreed to recording a video message which we did and sent to the GM Mayor’s office.

There were delays and in desperation Brian gave permission the story to be shared with the M.E.N. which we did and resulted in publicity made all the more affecting by it’s appearing (with his family’s blessing) a week after he had died. This report can be seen here.

There are many lessons here for others who want to change the world for the better: build a civil and listening relationship with your political representatives, use your life experiences and contacts to inform your opinions and arguments, give more than you take, bring original insights to causes, do not be afraid of being outside the party line, and persist when you don’t get your message through.

It was a joy to see his last days comforted by the reconciliation and love shown by those he had been apart from for years.

Brian died at the end of July having known of his serious cancer for 18 months. His funeral, across the road from his flat, at St. Matthew’s Stretford (where he was a regular), brought to an end a life helping others. He leaves a former partner, daughter, granddaughter and friends around the world of many faiths and none.