Global Justice Leicester has had fewer meetings recently, but we are active and campaigning … 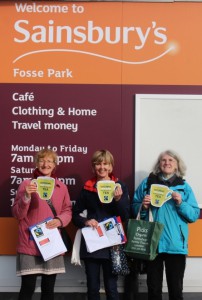 We chatted to customers outside of the Sainsbury’s Store in Fosse Park and asked them to sign a letter to the store manager. The letter expressed concern that Sainsbury’s was ditching Fairtrade certification for its own brand tea – and noted that the packaging is confusing. The packaging states ‘Fairly Traded’ which could confuse people into thinking it is Fair Trade certified. It is not! 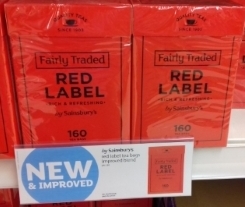 Many customers regularly bought Fairtrade goods as they wanted to make a difference to the lives of poor communities. Find out more on the Fairtrade Foundation website

Don’t forget to support Fairtrade Fortnight – it is from 28th February to 11th March 2018.

Fairtrade Fortnight aims to put a spotlight on trade. When trade is fair it has the potential to improve the lives of the farmers and workers who grow our food. When trade is fair, it can make the world a better place. Together we have that power, so get involved and be part of the difference.