You are here: Home / Speaker meeting / Meeting tackles hunger in Leicester and overseas 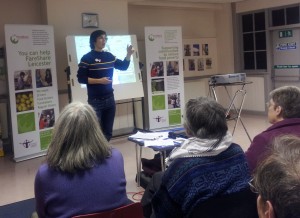 Peter and Sheila Yates of Fareshare Leicester and Dan Iles of the World Development Movement highlighted the problems facing poor people in Leicester and Kenya trying to feed themselves and their children in the face of rising food prices and reduced incomes. This meeting was hosted by Christians Aware and the Leicester World Development Movement Group at Christchurch, Clarendon Park Rd, to mark Fairtrade Fortnight.

Pete and Sheila Yates described how their charity is able to reclaim food from supermarkets and other sources, which would otherwise go to landfill. This food is then made available to Leicester organisations who help individuals and families who struggle to feed themselves.

Dan Iles of the World Development Movement spoke of how four main food companies control most global food production. He also explained how food commodity speculation by banks and other institutions forces up prices for poor families in developing countries and that these families spend 70-90% of their incomes on food.

Dan described the Food Sovereignty Movement which emphasises the need for local control over land and food production. Within the UK, the Food Sovereignty Movement brings together people who care about food and those who produce it. In a world where nearly half of the population are farmers, it is importance to recognise the importance of small scale food production.