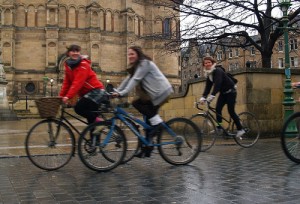 For this month’s group meeting we invited one of the Transition Edinburgh University team, Ric Lander, to come along and tell us a little about who they are and what they do.

Ric began by introducing the idea of transition communities, which aimed to move away from economic dependence on fossil fuels – an unsustainable source of energy – and towards a low-carbon, low-energy existence. This requires looking at and rethinking all the ways we currently use fossil fuels. As Ric pointed out, it is important that this is viewed positively and promoted as a tangible alternative. He also put forward some interesting ways that this message had been relayed to students at Edinburgh uni. He highlighted that another important aspect of transition is its emphasis on community building.

His talk was followed by a lively discussion with the group, on matters such as transition on a local level vs transition on an international level , which in turn brought up issues such as Fair Trade, exports etc.

Further info can be found on: