Our next meeting has been re-arranged from the 7th November to Thursday 21st November in The Marine Hotel, 43 Marine Parade, Saltburn-by-the-Sea TS12 1DZ, starting at 8.15 pm.

All welcome but get in touch if you would like to come along in case there has been a need to change the meeting date.

We had a successful meeting on this subject earlier in the year, this got a mention in Think Global. We now have a new case that National are encouraging us to support. It is the case of a mining company developing a mine in Armenia. Previous mines have contaminated water sources so there a local community action against this company but they intend to start an ISDS case seeking an amount equivalent to two-thirds of the country’s annual budget.

The Trade Bill is still going through Parliament. The main focus of campaigning now is on a future UK-US trade deal if or when we leave the EU. The main risks of this are to food safety, the NHS and climate change. We discussed the Soil Association research which points out the significant differences in standards in the two countries and the fact that apparently annual incidents of food poisoning in the US are 14% higher than in the UK. 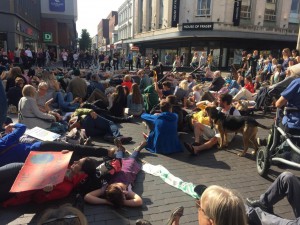 The AGM passed a motion that we should do more work on climate in the future.Several of our group attended the recent Climate Change action in cities around the country on 20 September.

Many of GJN’s policy proposals have been taken up by the Labour Party.

A new firm is planning to develop Carbon Capture on Teeside. Next week there are a series of public consultations on this

Action Barbara to send details of this to members so that they can attend if they wish.

The date for this is Thursday 19th December

Action Jacky to find a venue for this.

Our next meeting will be on Thursday 21 November.

Following the last meeting Barbara sent a letter, on behalf of the group, to the Darlington and Stockton Times outlining our concerns about a future trade deal with the United States. 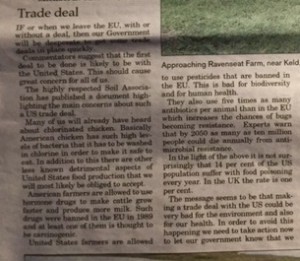 The letter was printed in full including the message that making a trade deal with the US could be very bad for the environment and also for our health. In order to avoid this happening we need to take action now to let our government know that we will not accept the lowering of our food safety standards.

Our next meeting is on Tuesday 8th October in The Marine Hotel, 43 Marine Parade, Saltburn-by-the-Sea TS12 1DZ, starting at 8.15 pm.

All welcome but get in touch if you would like to come along in case there has been a need to change the meeting date.

Climate Change This issue is getting more publicity from the Extinction Rebellion protects. We wondered why GJN is not campaigning more on this issue. There are legally binding targets in place but little real effort is being made by the government to achieve them. Scotland seems to be leading the way on emissions.

Corporate Courts There is an ISDS game for use on stalls. We are also being offered a speaker from National. In the past we have not found the games too useful and also we do not have a venue for a stall.

Our open meeting took place last month and was well supported by the Labour Party, this link might be useful in the future.

Trade Democracy The Trade Bill is still going through Parliament.  Lords made some changes to it to improve transparency but it has to return to the Commons. We are being asked to lobby but this is difficult with our current Tory MP’s.

Pupils Before Profit There is concern about the fact that the Aid Budget is spending millions promoting education privatisation in the global south. There is a new campaign about this. There is a briefing about this and an online petition but printed campaign postcards will soon be available. A four-minute video about this is available.

Positive Money We are being offered a speaker from this organisation. We discussed the matter and thought that it was a long way for a speaker to come and that it is not so relevant to our organisation.

Generally We feel the lack of other groups in this area to link to and to campaign with.

Open Meeting on Corporate Courts Held on 15th May 2019 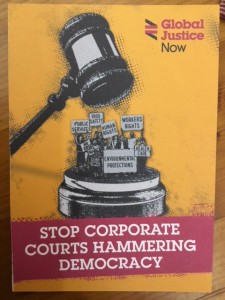 We joined with the Teesside Socialist Campaign Group to have an education meeting on the subject of ISDS (Investor State Dispute Settlement) which is a little known element of many trade deals. We used the Global Justice power point which attempted to explain the serious impact that Corporate Courts can have on the attempts of individual countries to enforce rules that will protect both people and the planet.

ISDS gives special rights to foreign investors that no one else has, not domestic companies and not ordinary people. It allows corporations to bypass national justice systems and undermine the laws of democratic states. The companies have their own justice systems where everything is set up in their favour. The courts do not have to uphold human rights law or international environmental law. There is no appeal process, the cases are held in secret and the arbitrators are not independent, they are private lawyers, paid by the case, so there is a built in financial interest to deliver outcomes favourable to investors. he ISDS system has already undermined civil society struggles in a number of countries. Often governments simply cannot afford to respond to concerns about pollution or deforestation because of the threat of an ISDS case and the huge amount of compensation that companies would be seeking.

END_OF_DOCUMENT_TOKEN_TO_BE_REPLACED

You are welcome to join us at any of our meetings. We suggest you email us beforehand just to confirm arrangements.

Middlesbrough South and East Cleveland: Simon Clarke (Conservative) Or enter your postcode to find your MP