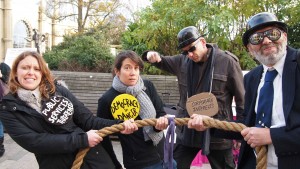 Heard about the Transatlantic Trade & Investment Partnership? Neither had we until a month ago. These under-publicised negotiations currently taking place between the EU and the USA plan to create a huge free trade zone between the two blocs.

However, the most insidious part of the treaty is that it will give corporations the right to sue governments.

What this comes down to is that if we manage to campaign our government for a change in the law – whether that be with regards environmental protection, health care provision, in fact, anything that means a corporation will lose the chance to make their usual profits, they will then have the right to sue that government for compensation.

The tribunals will be decided on by corporate lawyers. In secret. It is the very antithesis of democracy.

Sounds insane, but it’s true. And it’s happened before where there have been other trade treaties. It’s happening right now, across the world.

Strangely, nobody has consulted us on whether we want our sovereignty signed away to corporations. So we decided to take a tug-of-war to the streets of Brighton and ask people to take part to decide who ought to win – big business or citizens’ rights.

As well as winning the struggle for democracy (hooray!), we also got hundreds of signatures on our petition to be sent to Business Secretary Vince Cable, and a full-colour feature in local paper The Argus. 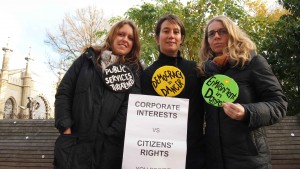 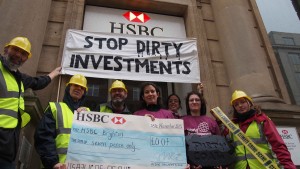 On the 2nd November, dressed in hard hats and hi-vis gear, our group descended on HSBC in Brighton to announce the imminent closure of the bank to make way for a new open-cast coal mine. We even had a lump of ‘dirty coal’ ready to go.

The protest was part of WDM’s Carbon Capital campaign and took place along with hundreds of others worldwide during Dirty Energy Month. We wanted to highlight HSBC’s role in funding £3.8 billion-worth of carbon-intensive energy projects around the globe, destroying the local environment and driving forward climate change.

In the Borneo rainforest, people had been compensated for the loss of their land to make way for the coal mine – to the tune of 1/2 a pence per square metre.

We therefore decided to compensate HSBC the equivalent amount for the loss of their branch, and wrote a giant cheque for seven pence.

It was only fair, after all.

For all those who knew her, I am writing to let you know the sad news that Sarah Berger, a dedicated WDM campaigner and fellow member of the Brighton and Hove WDM group, passed away on 23 March, after a long battle against cancer. 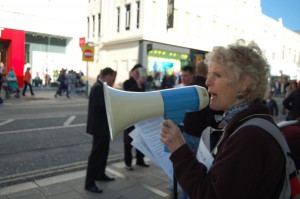 She was an amazing campaigner and wonderful person. Words used to describe her have included: determined, wise, articulate, intelligent, passionate, committed, dramatic, practical, organised, courageous, media-savvy, upbeat and positive. I knew her from being a fellow activist at Brighton and Hove WDM and as a friend. Here’s some of the stuff that she did:

Sarah once appeared in the press as a grandmother pretending to row a boat to Genoa for the G8 protests, she dressed up as a first-aid box for a London march, crashed to the floor with a “debt-laden” sack in a tug of war, dressed all in white as a goal post in an unfair football match or as a trade barrier in Churchill Square, her theatricality was there for all to see.

At the various demos, stunts and marches she was always ready to carry a banner, keen to use a megaphone and prepared to argue with establishment lackeys (e.g. at climate marches, RBS demo, World for Sale stunt, Churchill Square). She was brilliant at talking to the press and TV, her interview making it on to the BBC in a documentary about the 2005 Make Poverty History event and G8 protests in Scotland.

Sarah was always in the thick of it, co-organising big events like the “Ballot on the Beach” (a huge event in Brighton) and public meetings involving speakers from developing countries or parliamentary candidates. She was always able to get to the nub of what we were trying to achieve and keep a clear head if any of us were getting carried away or a bit off track.

Despite increasing health problems she was still keen to get involved when she could and feisty enough to be disappointed if she felt that something was not edgy enough or wasting an opportunity. I was amazed when she turned out on a bitterly cold day last December for the annual climate change demo and march in London.

Sarah had of course been very active in other ways as well, in other campaigns, taking a lead in her local community project and with a busy family life. She died peacefully at home surrounded by her loved ones as she would have wished.

She was a great inspiration to all who knew her and will be sorely missed.

Her family have asked that, rather than buying flowers, people make a donation to WDM. 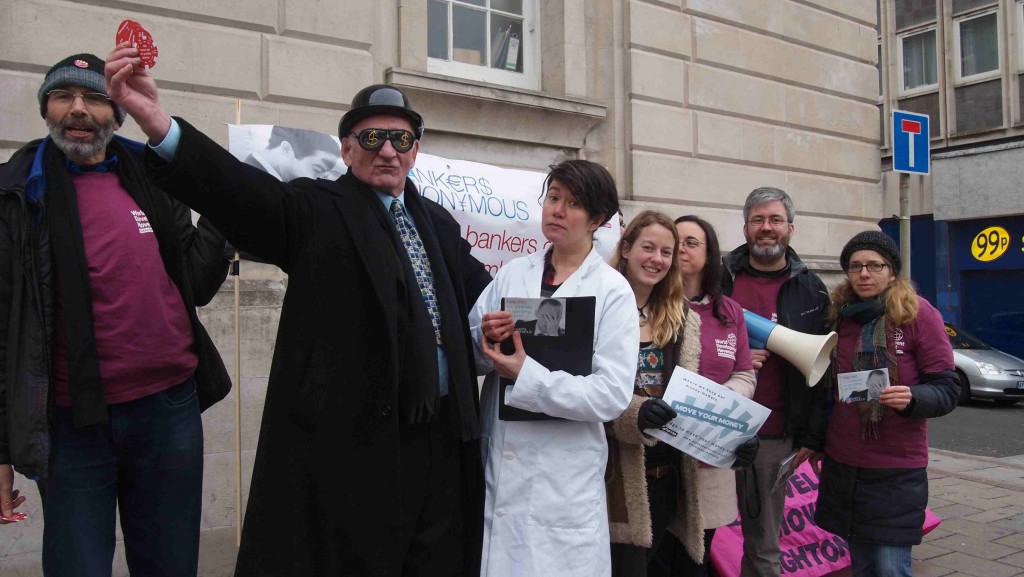 Here’s a photo from our street theatre skit last Saturday – our pop-up therapy session for a poor banker addicted to gambling on food with other people’s money, all in aid of pushing George Osborne to back stricter regulation of the banks at EU level. Our local paper the Argus covered our action, and you too can help a banker kick the habit at bankersanonymous.org.uk, and you can watch a brilliant short video of our “therapist” attempting to cure the banker here.

Instead of our usual meeting, we’ll be having a Christmas social on Tuesday 11th December at the North Laine pub on Gloucester Place, 7pm onwards. More details on ‘Our Next Meeting’ page or just turn up – see you there…

If  you missed last month’s free Growing Change screening (see below) we’ll be hosting another screening at Latin Voices Live in the Education Pavilion at Brighton museum this Saturday 17th November at 12pm.

Last month’s screening at the King & Queen was packed out so if you didn’t get the chance to come along to see this inspirational documentary about the Venezuelan food revolution, get down to the Dome and museum this Saturday. The whole day is free and there are a host of events going on including music from Polito Boogaloo plus craft workshops and poetry readings.