At a packed meeting in Kendal Nick Dearden, National Director of Global Justice Now  and Tim Farron spoke out to emphasise the need for the right post-Brexit deal to be struck.

Nick outlined GJN’s position on seven Brexit “Red Line” issues covering protecting workers and human rights, tax justice, safe and sustainable food, preserving the UK’s sovereignty against corporate power in trade deals, and on climate change and the environment. He said “we need to overcome the hatred and xenophobia in the national debate by creating an economy that responds to people’s needs, that values equality and that is sustainable”.

Farron responded by congratulating GJN on coming up with these red lines and replied that he supported “all or most” of them. He said “if, for example, we really were to pull out of the European Human Rights Convention, we would be left within Europe in a category with perhaps only Belarus. We wouldn’t be able to speak with dignity about human rights or civil liberties anywhere in the world.

Both speakers emphasised the need for the government to respond to the climate change crisis by switching financial incentives to favour renewable energy technologies such as those supplied by Kendal firm Gilkes rather than fossil fuels.

The speakers agreed passionately about the need to reinforce Britain’s responsibility towards refugees as a key to ensuring the country remains outward looking and internationalist in the Brexit negotiations.

Nick Dearden closed the meeting by saying “We have shown by the defeat of the proposed EU-US trade deal TTIP that ordinary people can change things for the better. To all those who want things to be better there’s one message – get active and make it so.”

CETA action. Handover of petition to Tim Farron – our local MP and leader of the LIB DEMS

We released a Press Release – see below. However, we wait to see if our local paper will print it!!

Over a thousand local residents sign petition against more legal powers for big corporations Last Friday, local residents including supporters of Global Justice Now and South Lakes Action on Climate Change presented a petition to Tim Farron MP signed by over a thousand of his constituents. The petition demands that provisions for a separate court system for multinational and foreign companies be removed from trade and investment agreements between the EU and Canada (CETA) and the EU and the US (TTIP), because they bypass national court systems and would enable multinational companies to sue governments for millions or billions of pounds for potential loss of future profits if decisions by governments appear to threaten their interests. There is ample evidence already of misuse of similar clauses in existing trade and investment agreements, including by US oil and tobacco companies, and by Canadian mining and fracking companies, and also evidence that government decisions have been watered down or even reversed in consequence. The provisions in CETA would open the UK to challenges from the powerful US multinationals as well as Canadian companies, because over 80% of US companies operating in the EU also have offices in Canada. We cannot risk any new climate legislation being undermined by powerful US oil companies, or any threats by big multinationals to our legislation to protect our food standards, health and safety, environment, and employment rights. These provisions are called ISDS – Investor State Dispute Settlement, or ICS – Investment Court System, and the briefing document www.bit.ly/ICSISDS provides links to useful references.

Continuing our action on CETA, the link below takes you to the main GJN site and an explanation of the threat of CETA.

Two Birdcage actions in Kendal on 13th July and 13th August, highlighting the danger of TTIP, CETA and the links to climate change and flooding, has good responses from the public and we now have over 1000 signatures on our petition to Tim Farron.

After an illuminating report on the Barcelona declaration and following group discussion, we agreed to email our local councillors regarding the implications of CETA and TTIP on local councils.

TTIP has serious implications at both National and Local levels challenging democratic decisions.

If you have the time and energy we are asking you to email your Councillor perhaps asking to meet them on this subject, but specifically suggesting that they try to get SLDC or CCC to sign the Barcelona Declaration (pdf link on Henry Adams website – see below).

With the imminent ratification of CETA, this action is needed soon.

If you feel able, please follow the links below, (copy and paste into your browser):

to find your local SLDC councillor:

In April 2016  Mayors and elected local representatives, participated in the first Pan-European Meeting of Local Authorities” on TTIP, CETA and TiSA. This  will hopefully help increase the number of “TTIP Free Zones” and increase “solidarity” and effectiveness in combating the constraints and loss of local democratic power that these agreements would impose on local authorities and democratically elected councils throughout Europe.

1500 councils across Europe signed the The Barcelona Declaration.  41 Uk councils have signed, including Birmingham City council.

Sue Walley of GJN-SouthLakes visited the event on day 2 as part of a GJN contingent led by GJN’s James O’Nions and gave us an excellent slide presentation on 9 May, followed by a workshop on how we can progress this with our own local councillors. Please use our Upcoming Actions tab to access action links.

On Monday 11th April Dan Iles from Global Justice Now Head Office gave an enlightening talk, with a short film, outlining the threat to Africa’s farmers from the huge corporates. The film outlined his recent visit to Tanzania where he met farmers fighting to keep food production under local control in the face of aggressive action on land, soil and seeds by multinational corporations. He met and described the many local activists working to maintain and spread organic, sustainable agriculture. 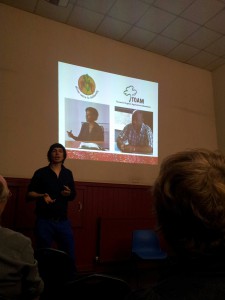 Further information – and action that you can take – can be found on the following web links.

To email your MEP:  http://action.globaljustice.org.uk/ea-action/action?ea.client.id=1784&ea.campaign.id=48237&ea.tracking.id=website

For more information and info graphics:

On Friday 22nd of January we held a public showing of the film “This Changes Everything” at the Shakespeare Centre in Kendal. A full house of nearly 60 people enjoyed this film version of the book of the same name by Naomi Klein.

The film showed a number of examples of communities throughout the rich and poorer worlds who are fighting actions by large corporations, notably oil and coal companies, which threaten their homelands as well as posing a direct threat to the world generally in the form of Climate Change.

Just over half of the audience then stayed behind after the showing and held a discussion on aspects of the film and some wider subjects. The main discussion focused on what is our “front line” in the fight to protect the world from both corporate power and global climate change. The main response from the audience to this question was to focus on how we can campaign locally to make connections e.g. between local flooding and climate change and to challenging TTIP & CETA.