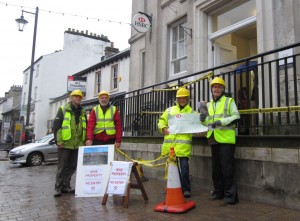 S Lakes WDM group picketed the Kendal branch of HSBC on 2 November about the banks investment and support for dirty energy projects around the world. 4 members of the group went into the bank and presented a cheque for 7p to the branch manager to represent the “compensation” for “renting” about 14 square metres of pavement outside the branch office. We  explained that 7p is the equivalent amount paid to Indonesian villagers who have lost their homes and land to huge open cast coal mines, which also permanently destroyed the virgin rain forest which was the villager’s main source of food and livelihood, as well as polluting their water, and causing flooding. The bank manager and a colleague of hers were friendly and politely listened to our concerns, whilst not expressing any view in either way. (except a small acknowledgment that it would be awful if it were the Lake District National Park that was being destroyed.). Interestingly HSBC staff had clearly been warned that campaigners may turn up, and were content that we give them leaflets and booklets, and have our say, as long as we didn’t obstruct customers or take photos inside the bank.

In spite of heavy rain and a few thunderstorms, local WDM activists spent 4 hours in the centre of Kendal talking to shoppers,  53 of whom signed cards to be sent to Stuart Gulliver, the CEO of HSBC. WDM will deliver a piece of coal to HSBC for each card signed, so if you haven’t signed yet, get hold of a card.

Earlier in the week 31 local people attended a talk in Kendal given by an Indonesian campaigner who explained the shocking impacts of spiralling levels of unregulated open cast coal mining on the Indonesian environment and on both rural and city peoples. The impacts and scale of these Indonesian dirty energy projects, heavily financed through the London Stock Exchange, are not as well known as those of the Canadian Tar Sands, or Niger delta oil extraction, and have an even worse effect on climate change because of the loss of rain forest.

WDM’s aim is to get transparency about the sources of finance for dirty energy projects, and this should inform the current movement for “disinvestment” from fossil fuels. See also http://gofossilfree.org/europe/  and http://www.operationnoah.org/fossilfreetour.”