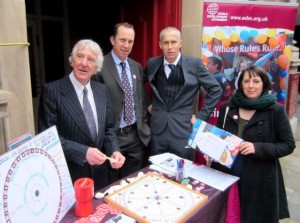 Campaigners from the Shropshire group of the World Development Movement set up a ‘Bankers Anonymous’ stall at The Unitarian Church, High Street, Shrewsbury, on Saturday 9 March 2013 to highlight the banks’ addiction to gambling on food prices.

Financial speculation by banks and hedge funds is driving up food prices, sending the cost of basic foods spiraling beyond the reach of millions of the world’s poorest people. In March Barclays announced a withdrawal from speculating on food, following public outcry over its effect on hunger.

The World Development Movement is calling for tough controls on speculation. The Shrewsbury campaigners asked passers-by to take part in a ‘five step programme’ to help bankers kick their addiction. The steps included signing a postcard to local MPs, asking them to urge George Osborne to act to control speculation.

European finance ministers, including George Osborne, are due to vote in the coming months on draft regulation to curb food speculation. But the UK government has so far failed to back tough controls.

Anthony Twist from the Shropshire group of the World Development Movement said: “Banks need our help to quit gambling on food. Only strong regulation will stop speculation playing havoc with prices. Food is a basic human need and banks must not be allowed to gamble on it to make a fast buck.”

Pictured: Mick Gilmore, Dave Caton and Anthony Twist from Shropshire WDM and a member of the public.

Read all about it in the Shropshire Star! Food prices protest takes to the streets of Shrewsbury