Shoppers in Broad Street Reading were shocked to see ‘Donald Trump’ promoting the range of food he wants to include in the new US/UK trade deal, including chlorine washed chicken and baby food containing arsenic and pesticides. Secret talks have already started between the US and the UK over a deal, and leaked documents have shown government officials discussing how to ‘sell’ American food standards to the British public.
Many people stopped to sign cards to the secretary of State for International trade asking her to oppose any US/UK trade deal that lowers our food standards or opens the NHS to US corporations. 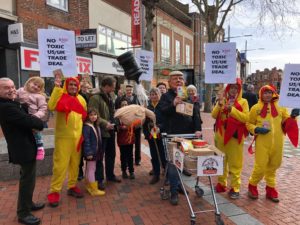