This was the confident title of GJN’s annual post AGM get together, this year staged in York. In the event I was the only person from Manchester there (as far as I know), which was a shame as it was a valuable time for networking. (Eve Nortley of GJ Bolton spoke of collaboration and told of a potential new member who is a mature social activist and keen to be involved and who will find coming to Manch. for meetings much easier than where he is currently engaged.) 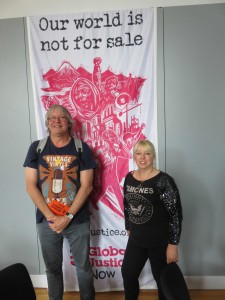 When there are simultaneous alternative workshops one person can’t cover all- I didn’t go to sessions on overseas aid, energy democracy, a world without borders, and food democracy.

Even before the meeting I profited from a good chat about new activism capacity with Laura Williams who I met on the train and arriving at the venue over an hour early met Roger Miller – a regular veteran member from Bristol and we went for a stroll- more useful experience sharing. A third discussion (not on the agenda) was with Oliver Blensdorf (GJN Sheffield) who argued against Stop Trump protests as they objectify and depersonalise someone, this being our objection against his policies- do we achieve “The World We Want” by acting in ways we don’t?

The AGM was without serious hitch, though, we were warned of GJN having to cut back on staff in the months ahead. As with the afternoon, there was an apparent disparity in age and ethnicity between attenders and GJN salaried staff. 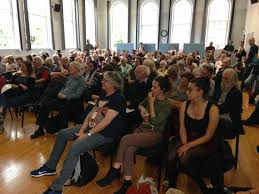 When the topic of participation of Youth Network members in local groups was raised the suggestion from a new Youth Network member of GJN’s Council was that we should make our meetings more exciting. Perhaps it is “The World We Want”, but I await gespannt.

There was the usual atmosphere of a Green/Corbynite consensus which sometimes makes me feel we are heading for a situation where folk go along with something they don’t fully believe because of corporate loyalty. It may be “The World We Want”, but do we all want to be told that we want it, with scant regard for the concerns and feelings of those who may see what they have sought for years trashed and for this to be asserted as if self-evidently some sort of heavenly revelation? 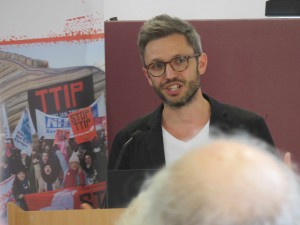 Perhaps the most important “take away” from the day for me was contributed by Jason Hickel <https://www.jasonhickel.org/about/> (whose book The Divide was being given out as a motivation for taking out GJN membership). Arguing that focussing on the metric of “absolute poverty” (the old $1 per day) is deceptive as that number is falling, whereas if one looks at $5 per day one sees growing disparity. Tied to this was the idea of “degrowth”. We may say we despise the constant consumerist drive to “update” our lives and technology, but countries are blinkered to believing in constant growth without consideration of unsustainability.

It’s easy for me as English and middle class, owning my home and getting an occupational pension to feel I aspire to this, but do we really; can we sell the idea to our families; to our society, and to poorer people? And can we get “The World We Want” before “meltdown”.

Hmmmmmm. Things to think about- come next year and we can think together!