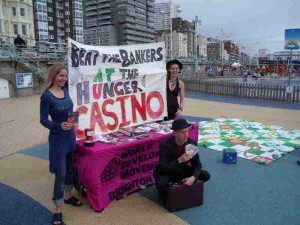 Here’s a photo from September’s action to publicise WDM’s food speculation campaign. Members of the public played Snakes & Ladders against an evil banker to highlight the need for regulation. The banker lost 25 times in a row – funnily enough that never seems to happen in real life.

Last Saturday, on the afternoon before England’s first World Cup match against the U.S.A., we took to the streets of the city offering football fans a “pub quiz” with a difference.

We invited passers-by to pick three questions from a pot – two football-related, and one development related. Anyone answering all three questions correctly won a beer mat and a badge.

The idea behind the quiz was to promote WDM website whoshouldicheerfor.com.

The website ranks any two of the World Cup countries on social justice indicators such as money given in aid, carbon emissions per person, life expectancy and so on.

We are going to continue our street quiz in Brighton on Saturdays throughout the World Cup. To compare any two World Cup teams on social justice rankings visit www.whoshouldicheerfor.com

Three of the questions were:
1. Which is the only South American team never to have qualified for the World Cup Finals?
2. Out of all the contestants, name either of the two countries with the lowest CO2 emissions.
3. Who is the only England player to win the Golden Boot for the tournament’s top scorer?

The requested URL /data/feed/api/user/wdm.brightonandhove?kind=album was not found on this server. That’s all we know.

A coalition of over 30 Brighton-based campaigners, in solidarity with groups across the world, took over the BP petrol station on Lewes Road, Brighton on Saturday 10th April 2010 to demand that the company withdraw its controversial decision to begin extracting oil from the Canadian tar sands.

Displaying banners reading “Tar Sands Oil Is Blood Oil” and “Shut Down Tar Sands”, the demonstrators peacefully occupied the petrol station forecourt with pop-up tents and explained to motorists prevented from entering why they were there.

“The tar sands are the biggest environmental crime on the planet,” said Will Cottrell, one of the campaigners. “The process of extracting oil from them is leaving a hole the size of England in the Canadian wilderness.”

“This catastrophe is largely being financed by British banks, financial institutions and corporations.”

He added, “There are toxic lakes so vast you can see them from space, the local indigenous people are being killed by poisoned water and food supplies, and that’s without the looming threat of runaway climate change.”

“Extracting oil from the tar sands produces three to five times as much greenhouse gas as conventional oil,” he explained. “If the tar sands continue being exploited, there’s absolutely no way we can escape ‘tarmageddon.’”

“It’s up to BP to take the responsible decision never to extract oil from the tar sands. Otherwise its newly re-branded name of ‘Beyond Petroleum’ is nothing more than a very bitter joke.”

“We have had a very good response from passers-by and motorists cheering us on. It’s good to know the truth about BP’s involvement in the tar sands is getting out there.”

The demonstration came as part of an international day of action spearheaded by activists from the First Nation tribes of Canada, who are suffering the worst effects of poisoning and environmental degradation from the tar sands. BP forecourts were also occupied in Oxford and London.

Come to the Cowley Club, London Road, Brighton from 7pm and listen to some great live music and poetry, topped off with a DJ set. £4/£3, all proceeds to WDM Brighton & Hove. Members & guests of the Cowley only.