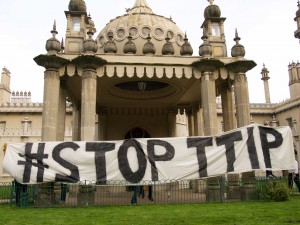 On the latest international day of action against the Transatlantic Trade & Investment Partnership – which saw 250,000 people marching in Berlin – Global Justice Brighton & Hove dropped a banner outside Brighton’s iconic Royal Pavilion to protest at the highly controversial trade negotiations between the European Union and the USA.

The banner with the legend “#STOPTTIP” remained in place for several minutes before the protestors were ejected by the Pavilion’s security team.

“We came here today to alert our fellow Brighton residents of the dangers posed by the potentially devastating Transatlantic Trade and Investment Partnership, or TTIP,” said Anna Cartwright, one of the campaigners.

She continued, “Over three million European citizens have signed a self-organised petition against this secretive trade deal, which will benefit huge corporations at the expense of ordinary citizens, and yet the juggernaut of trade negotiations still continues.”

Under the terms of the trade deal, currently-banned food products will be allowed to enter the market, the National Health Service could be opened up to private tender, and legislation intended to protect the environment will be quashed.

Also coming under fire from protesters is CETA (Comprehensive Economic and Trade Agreement), which will allow further privatisation of public services, and will pave the way for multinational corporations to sue governments in private courts over policy changes that will affect their profits.

Anna said, “Both deals are a direct attack on democracy, as they will give corporations massively increased influence over government policy in areas such as healthcare, food safety and the environment.”

“However, many individuals, groups and organisations have been working tirelessly across Europe and the United States to ensure that the trade deal and its contents are brought into the public eye, such as today’s international action and our banner drop this afternoon.”

“We had a great response from passers-by, many of whom were unaware until today of the many trade negotiations taking place in the European Union without consultation of its citizens.”